Finally got a kandouko (sake warmer)!

Before, I wrote about an article about kandouko, and I said that I want a one for pleasure of sake life. Later, I checked net auctions, but it was difficult to find a good item, or I didn't succeed in the bidding of such an item. Even when I succeeded in the bidding of a small kandouko once, I had to return the item I had received because it had water leakage. I mean I could not get any kandouko in spite of my efforts. So, my enthusiasm for owning such an antique item had gradually been shrinking until recently.

However, one day recently, an incident occurs at Sawanosuke.

Sawanosuke is an izakaya set up on the premises of Sawanoien run by Ozawa Syuzou. This small tavern has only an L-shaped temporarily set up counter, and is operating only on weekends until the end of February (for details, read the post about Sawanosuke). About two weeks ago, I was enjoying warmed sake at Sawanosuke. I saw there was a beautiful nice kandouko inside the counter.

By the way, in my understanding, there are two types of kandokos. One type is used as a standalone device, and the other is used in combination with a nagahibachi (box-shaped wooden hibachi used for heating) or irori (square fireplace fixed on the floor in a room). The mechanisms of these two types are roughly illustrated as follows: 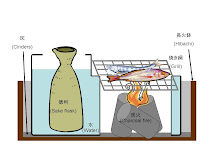 Type used in combination with a nagahibachi or irori

In use of either type, charcoal fire heats up the water in the vessel surrounding the fire, and the heated water warms up the sake in a sake flask placed in the water vessel.

The one kept in the Sawanosuke tavern was not the type used with a nagahibachi or irori but the standalone type. However, it was just placed there and not in practical use. This was an exhibited item in the bar.

Anyway, I was enjoying various types of warmed sake there while admiring this artifact. Then, the president of Ozawa Syuzou appeared. We had some conversation, including the following dialog:

This was a strange auction, where there was only one bidder but the price went up. In short, it didn't seem he wanted to sell it. :-)

However, once you are shown a beautiful thing right in front of you, and you are told you can buy it at a reasonable price. And just immediately after you are told so, you learn you can't obtain it. In that case, you probably crave to own it more strongly than before.

Thus, this incident added fuel to the dying fire, and I relapsed into my kandouko-craving disease. Later when I was checking the Internet for auctioned kandoukos, I found a nice item priced at 4,900 yen. So I bid it for 5,000 yen, and I could soon succeed in this bidding. This kandouko is the standalone type.

I selected the standalone type because I don't need to prepare a nagahibachi. The other reason is because, in case of a kandouko used with a nagahibachi or irori, the former is very heavy and difficult to move and the latter is permanently fixed on a floor and impossible to move from one place to another.

After receiving my kandouko, I made a test run of this new toy for the sake drinker. The taste of the sake warmed with this was quite mild.

Although it looks small, it holds a lot of water, maybe 2 litters or so. I prepare hot water in a kettle and poured the hot water in the kandouko, and set fire to some charcoal and put the burning charcoal in the brazier inside the kandouko.

The temperature of the water did not rise up to the boiling point but to a point hot enough to prepare warmed sake. A small amount of charcoal was unexpectedly enough to warm the water and sake. Above all, the amusing point of the kandouko was that I could grill some snacks on a grill while sipping warmed sake.

I think the kandouko is a wonderful gadget for sake lovers. Two or three of such people can use this to share a delight of warmed sake while grilling dried fish or squid or other foods and nibbling such foods at an easy pace. So, you readers who love sake, if you find this kind of gadget in a Japanese antique shop, in an Internet auction, or in any other chance, don't miss getting it.

Fantastic! Looks very portable, with the handle! I recently found an antique warmer, but a different style. I will try to post a picture soon, hopefully you will recognize the type?

V. san,
You mean you bought one? Look forward to your post of a picture.
I read your post about your brewing sake. Very interesting!

Thank you, I hope the sake comes out ok too! I will post a picture of the sake warmer as soon as I get a chance to use it!

Hello, I watched your youtube video about this interesting looking device, but I've got a question:

What about Carbon Monoxide when you use it inside?

I like warm sake in the winter, but I don't think I want to open the windows.

Yes, CO intoxication is what you must pay attention to when using this type of device. However, I haven't thought of such issue very seriously because I always use my kandouko in relatively large space and the fire is not so big.

Of course, I know using this device in small confined space such as in a car is tantamount to attempting a suicide.

Incidentally, the Japanese have been using various heating methods using charcoal fire in houses. Japanese houses in the olden days were not so air-tight.

I loved this entry. Kandouko sounds like a great addition to any sake-loving household.

Thank you so much!

Btw, Ive been reading other posts as well, what ever happened to the God Sake Mastery test. Did you pass?

Matthew san,
Thank you for reading my blog. Unfortunately, I failed in that sake mastery test. The test was very difficult and I don't feel I can pass it however hard I train myself in tasting skill.

Interesting to stumble upon this old post and learn about Kandouko! Thanks for sharing!

Yes, amusing old post. Didn't realize till I saw it that I must possess one. Maybe I can make one. Can never have too many rituals!!!

Brax~Tone,
Thank you for the comment. Sake warmers of this type are very scarce and difficult to find. So, I made one as a prototype. I shot video of how I made it.

Hi! Thought about you this week as I pulled out my DIY kandouku, and, coincidentally, after a long time without a supplier, met a fellow who has arranged for me to be able to buy Sawanoi sake again! I understand that there is a kimoto koshu, looking forward to trying it soon.

V. san,
Hi! It's been a long time since you left me a comment last time. How have you been? The Sawanoi kimoto you mentioned is Junmai Ginjo Tokyo Kurabito? That is great sake. I love it. Hope you can try and enjoy it soon.

HI! I've been caught up with family life, no time for making kandouko! Saw your video, very impressive! That is the sake, looking forward to trying it, will let you know!