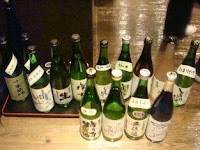 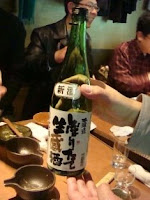 A yearend party was held in the restaurant called Kaoriya Sunday (December 28) in Tachikawa City, Tokyo. The party was hosted by the Tokyo Jizake Community, a community in the mixi SNS. The party attendees were all lovers of sake brewed in Tokyo.

We enjoyed 12 Tokyo sakes prepared by one of the attendees who is the owner of the restaurant Kaoriya. These sakes are all new brews of this season, having fresh flavors and enchanting aromas. Also, the attendees included one guy who was a chief sake brewer brought two bottles of Juemon, a sake brewed by him. Juemon was just marvelous sake with a bold and rich taste. I myself also brought an unfinished kijoshu (see "Today's Sake" at http://sakeandkimono.blogspot.com/2008/09/sake-brewery-tour-toshimayashuzo.html).

So, the amount of sake added up to about 60 go (10,800 ml). Since we were 17 people, so 3.5 go (630 ml) per capita. This is the average amount and I probably drank more than the average. I may have been drunk about 4 go (720 ml) or more. I must also take into account the fact that most of them were genshu (sake not diluted), with higher alcohol percentage than usual sake. So, the amount I drank was equivalent to about 5 go (900 ml) of usual diluted sake in terms of alcohol amount. In a nutshell, this amount is too much for me.

So, naturally, I got quite drunk. However, it is quite good to enjoy merry inebriety with friends, isn't it?

Today's Sake
Nakadori Nama Genshu Junmai Muroka Juemon (Toshimaya Shuzo)
Whether it is non-pasteurized or pasteurized, I love the rich and meaningful flavor of Juemon.
People should know that there is the amazing sake named "Juemon" in Tokyo.