Selecting a sake drinking vessel according to the type of sake you drink, how you like it, or your frame of mind -- this is one way of enjoying sake. I already have so many drinking vessels that I often hesitate about which drinking vessel to use when drinking sake. Therefore, I did absolutely not need to purchase any additional sake vessel in the pottery market held in Mashiko Town, Tochigi Prefecture, on November 3 to 7.

Anyway, on November 3, I went to the market in Mashiko Town with two drinking friends since they wanted to visit there and buy something.

At around 9:00 in the morning, we parked the car in a parking lot somewhat far from the venue. There, we could park the car free of charge. Then, we walked for about 10 minutes to reach the main street of the town, which extends from Mashiko Station to the east.

As we walked along the main street eastward, the street got busy and crowded with more and more cars and people. After we passed the intersection named Jonaizaka, I began to feel an all-out brisk atmosphere of the pottery market.

As I own a lot of sake drinking vessels, I intended to buy the least possible number of sake cups, but, in fact, I bought these four cups. There were so many nice works there. 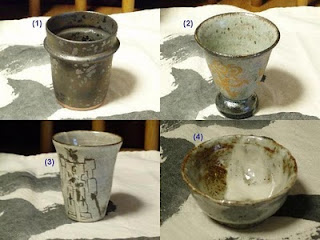