It was September of 2008 when I first visited Toshimaya Syuzou sake brewery. On that day, a managing director of the company showed us their facilities such as the rice washer, rice steamer, fermentation tanks, bottling line, etc.

At this time, we sampled some sakes of this brewery, and I drank Juuemon for the first time. The full-bodied bold taste of this junmai sake impressed me strongly.

By the way, Toshimaya Syuzou held an open brewery event last Sunday, on November 21. And, I went to the brewery for this event.

I got on a train and reached Higashi-Murayama Station at around 11:35. When I started walking to leave the station, someone called me from behind, and it was one of my drinking friends. So, we together reached the brewery.

At the brewery, we had sample this year's new sake, kamekuchi sake, etc., purchased bottles of junmai ginjo jukusei nama genshu, a limited item specially sold in this event, and then walked around in the venue to see whether some of our friends were there and to find no one. So, now, all we must do is to buy some sake and foods and enjoy them.

Since we heard the toji, master brewer of the brewery, and his company performers would start performance of South American folklore music from 12:30, we went to the square where a stage was set up. A lot of sake bottle boxes were arranged there so that visitors could use them as tables and stools. However, almost all the seats were occupied. 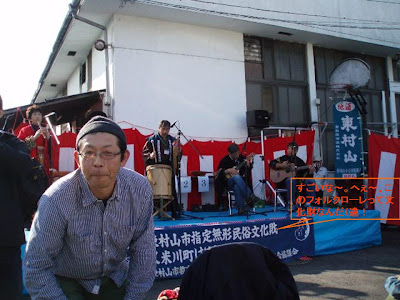 We were walking around in front of the stage for music performance while taking video and pictures and talking. Then, luckily two seats suddenly became vacant, and we could sit down just in front of the stage. I bought some foods and we had sake and foods while enjoying merry folklore there.

My friend bought a bottle of Juuemon Nakadori Nama Genshu, which we drank there. The toji was playing music with zampoña, quena, bombo, etc. while we were drinking his sake. That is to say, the toji amused us doubly.