June 10, a drinking party was held in a Japanese restaurant Kissen in Kawagoe city.

Many of the served dishes are those associated with Kawagoe city. Those foods included steamed sweet potato (Kawagoe is famous for its sweet potatoes) and baked eel served on a salter cracker that was seemingly the same type sold in the Kashiya Yokocho (confectionery side street) district in the city.

Speaking of Kawagoe, there is a sake brewery that making nice sake, which sake lovers should have a try of it. The brewery is Koedo Kagamiyama Shuzo Co., Ltd. and its sake is sold under the brand of "Kagamiyama." When I visited the city in February of this year, I had lunch in a Japanese restaurant there and had a chance to drink some sake of Saitama Prefecture including Kagamiyama. At that time, I became a Kagamiyama fan.

There was a sake brewery called Kagamiyama Shuzo in Kawagoe city before. This brewery had been established in 1875 and had continued operation until it closed its business in 2000. Then later, the successor of this brewery started making sake just last year as Koedo Kagamiyama Shuzo Co., Ltd.

I was so happy! 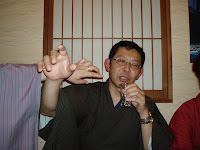 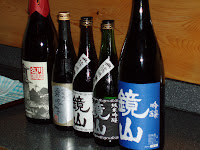