Okutama Lake, nestled among mountains in Okutama Town, the western part of Tokyo, is an artificial lake backed up by Ogochi Dam. The construction of the dam started in 1938, and was completed in 1957 after having been interrupted by the war for a period of several years.

From the Okutama Station to Ogochi Dam, you can take a bus, which drives along Japan National Route 411. The road in this section goes along the mountain stream of Tama River, passing through sporadic tunnels. This road is of course essential for people living in this area, but before this road was constructed, they were using an old road, which is now called Okutama Muakashi-michi (literally, old road in Okutama). 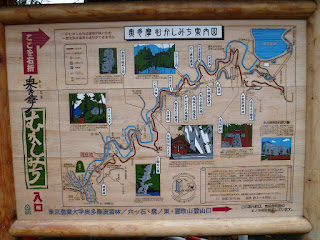 Okutama Mukashi-michi, an about 10-km community road, was made in 1899 to replace the about 14-km mountain path connecting the Hikawa district and Ogochi district, and this Okutama Mukashi-michi became a very important path for people in the area. Along the path, there were shrines, temples, teahouses, water vessel for horses bringing baggage or people, etc.

Some sections of the Okutama Mukashi-michi path are paved with asphalt, and we can see cars and trucks go up and down in these sections. However, some sections are very narrow paths, some sections consist of only a few flights of stairs, and even some sections are mountain trails. There were guideposts at every key location and it is easy for visitors to stay on the right track, and there are benches to take rest and well-maintained public restrooms along the road. So, anyone can enjoy a holiday walk at ease.

It seemed there were many interesting spots to see, and I decided to go for a walk along this road on a late autumn day. 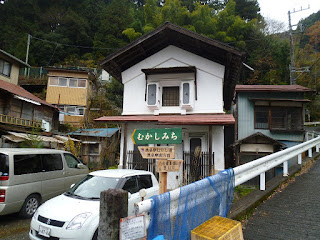 (Start point of the road)

With some food and drink in a daypack, I started Okutama Station about 10:00 a.m., and soon reached the start point of Okutama Mukashi-michi. From the beginning, I needed to walk up a steep asphalt-paved slope, called Haguro-zaka. Halfway on the slope, I found a tori gate on the right. There were stone stairs behind the tori gate. The stairs had to lead to a shrine and I thought I should pay respects to the god enshrined, so I started walking up the stairs, which was longer than I expected. When I finished two flights of stairs, I was in a small open space, and it turned out that the stairs I had been struggling up was just a part of the long approach to the shrine, because I found across the open space a guidepost indicating the way to the shrine. So, I gave up visiting the shrine and went down the stairs back to the main route. 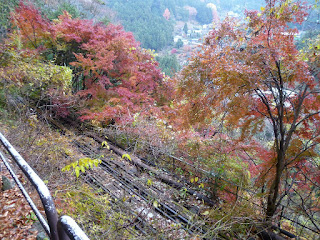 Then, the narrow path connected to a wider asphalt-paved road, and soon I reached the point where a well-maintained house of public facilities. Inside the house, there is also a place for walking passengers to take a rest. 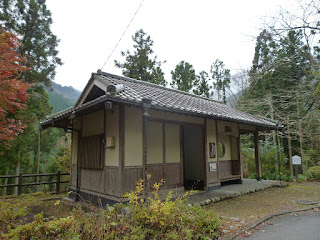 (Well-maintained public restroom along the walkway)

The walkway went through mountains and I walked admiring beautiful autumn leaves here and there. 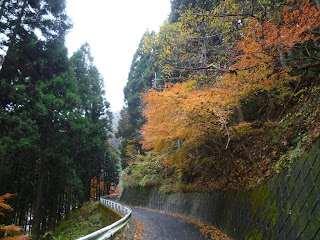 At some points, I could see some part of that railroad track. In a small community called Sakai, I found a railroad bridge above my way. The railroad seemed to have been running almost parallel to the walkway, and I could see its remnants while walking. 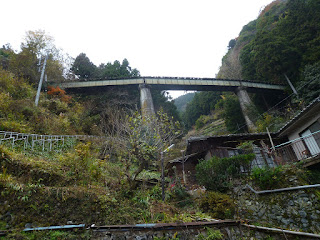 The walkway was generally very comfortable to walk, relatively even, not hard to walk (just a short part in the beginning and about an-hour part in the last were mountain trails).

After leaving the Sakai community, I soon reached the Shirohige Shrine. In this small shrine, a big rock is enshrined as the object of worship. In summer, sanbiki shishimai dances (a type of local performing arts performed by three dancers with headgear resembling the heads of lions, other dancers, and musical instrument players such as bamboo flutists) are performed in the precincts of this shrine as offerings to the god. I have seen their performance before, and it was very interesting. 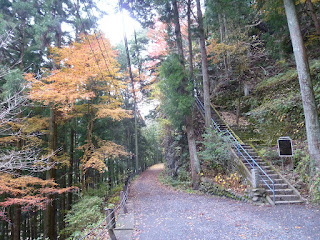 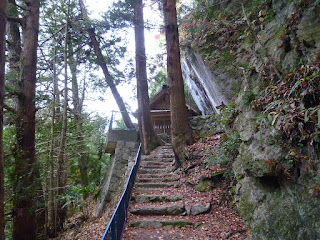 (The tilted huge rock on the right of the shrine house is the object of worship.)


In a few-minute walk distance from the shrine, I found a maple tree beautifully decorated with red and yellow leaves. The colors of this tree seemed to be brightening up things around this point. 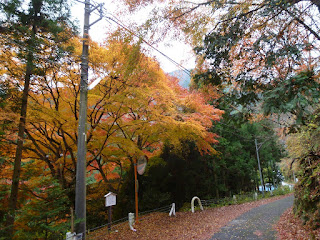 The photo below shows a water vessel for horses to drink. According to the description on the board, there were three teahouses around here so that passengers can rest for a while. The teahouses were selling snacks, udon noodles, bean-paste buns, tobacco, etc. Guests could even drink cups of sake. 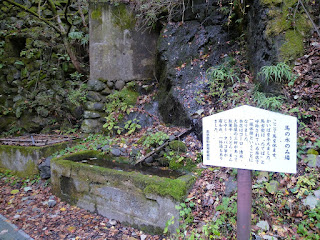 (Water vessel for horses to drink)

I had been walking for over three hours since I started walking when it was around 1:30. I felt very hungry and I had been looking for a nice place to have a rest and eat my lunch. And, I finally found a perfect place for my lunch. The place was overlooking the valley, and there were tables and benches surrounded by trees with yellow, orange, red-colored leaves. 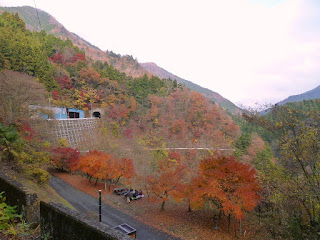 After having the lunch, I started walking again and soon the walkway left the asphalt-paved road and turned into a trail in mountains. The walkway was most arduous in a section beginning from this point. However, I like walking on a mountain trail while seeing beautiful trees and leaves. I think this part was the most interesting for me. 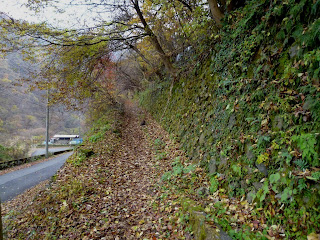 (Point where the asphalt road ends and the mountain trail starts) 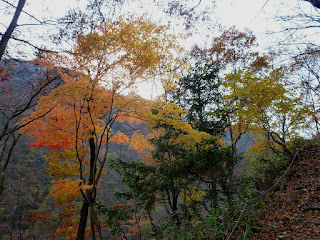 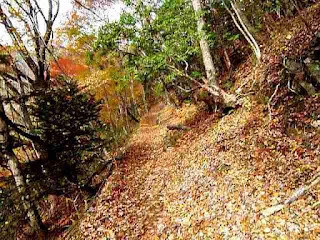 At a point close to the end of this walkway, there is a nice lookout platform beside a teahouse named Aome-fudoson Rest Station. From the platform, I could overlook Okutama Lake. I enjoyed a nice lake view. 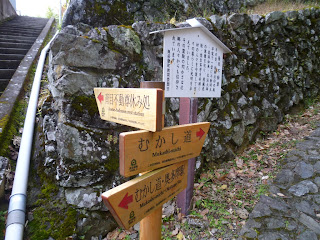 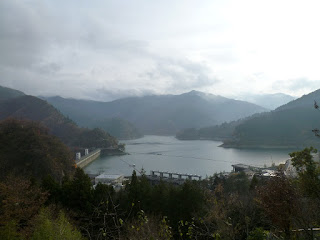 (Lake view from the lookout platform)

From here, I got to the Mizune bus stop in 30 minutes or something to end my walk this day. It was fun to walk along this old path while enjoying nice views of the valley, mountains, and autumn trees, and giving more than a passing thought to life of people who lived in this area in olden days.