Narai is an old inn town located in , . The town is on the Nakasendo that connected Edo ( in the present day) and Kusatsu-juku ( , in the present day). The roughly 1-km-long main street of the town is lined with inns and various shops including local food shops selling oyaki, goheimochi, buckwheat noodles, or sweets, lacquer ware shops, Japanese pickle shops, liquor shops selling local sake, and craft shops.

The sake brewery Sugi-no-mori Shuzo is also located on the main street of this inn town. I searched for a Web site of this brewery but could not find such a site. Maybe it does not have one. This company seems to have gained in popularity through word of mouth.

Recently, my sake-drinking friends and I attended a bus tour that traveled to Narai and other sightseeing spots. In this tour, we stopped at this old town for about 50 minutes, so we dropped in this brewery. 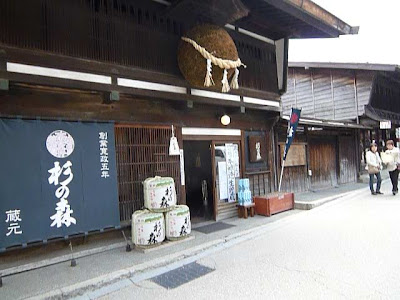 There was a big cedar ball under the eaves of the brewery building. I think this type with a straw festoon is very rare.

I bought a bottle of Junmai Ginjo Suginomori at this shop. At this time, the shopkeeper gave me some plastic cups so that we could enjoy the sake in the bus on the way home.

After leaving the last sightseeing destination of Takato Joshi Koen, an old castle ruin park, which is famous for its cherry blossoms, the bus traveled from to .

In the bus, when I opened the cap of the sake bottle I bought at Narai, the bus was running along the winding road that climbed up to My sake cup in which I poured some sake, sometimes slid on the tiny table attached on the backrest of the seat in front of me. I had to be very careful and needed to hold my sake bottle and cup to prevent them from toppling or falling down. I gradually began to feel dizzy from the bus movement on the road with frequent curves and it became difficult to continue drinking the sake. What is worse, after passing , the descending road was much steeper than the ascending one and it had many hairpin bends. I was sure that this was the most unsuitable condition for drinking sake.

Therefore, I shot the video I provided below while the bus was in rest in the parking lot of souvenir shop Oginoya that was located just close to the Suwako interchange on Chuo Jidoshado Express Highway (in a shaky bus, I need another hand to shoot video while holding a sake cup in my left hand and sake bottle in my right hand). I used my cell phone camera to shoot this, so picture and audio quality is not very good.


Although this is a junmai ginjo sake, its aroma is quite subdued, and flavor is unaffected. So, I recommend this sake for someone who wants to enjoy carefully a substantial flavor or acidity of junmai sake. Many people describe such sake as being flinty and dry, but this sake exhibits a bold and impressive taste deriving from koji rice, and just "flinty" or "dry" is not a right word for describing this sake.

Anyway, after the bus finally entered the express highway from the Suwako interchange, the seat is no longer shaky. So, we resumed enjoying the sake in peace. I like a bus tour because, unlike a drive trip, I don't need to drive a car and can drink sake freely.

The izakaya I really wanted to be in my city

Recently, I dropped in a cocktail bar, and ordered wine and some cheese. I liked cheeses with the red wine, especially Brie de Meaux and Camembert de Normandie were my favorites.

When enjoying my cheese with wine, the bar manager, knowing that I was a big sake fan, told me about a new izakaya in my city.

He told me that the izakaya carried an unusually wide selection of sakes. Excited at the news, I could not help stopping wine to leave for that izakaya soon. So, paid for my two glasses of wine and cheese and left the bar. According to the instructions by the bar manager, I walked across the railroad at the nearest crossing and went to the T-junction, where I took the left. I could easily found the lighted sign of the izakaya "絆" (Kizuna) from quite a distance. 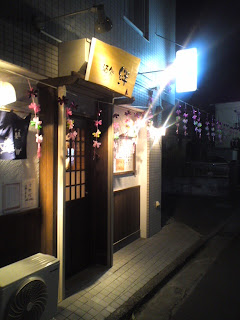 I could narrowly peep into the restaurant through a small latticework pane on the front door. I went inside, and there was no customer. There was a counter and a few tables. The structural design of the restaurant was like that of a bar or karaoke snack bar.


The interior wall was light-colored fake-wood-grain finished. You could tell the izakaya Kizuna had just started its operation from arranged flowers placed in corners of the restaurant. 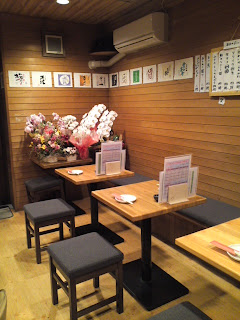 Just the manager and I were there, and I could enjoy sake in a quiet environment.


When I looked in the menu, there was a long list of sake brands. There were Yukinobosha, Okunokami, Yuho, Dassai, Nabeshima, Juyondai, Oroku, Tensei, Jikon, Hoka, Mutsu Hassen, Yamayu, Gorin, Kudoki Jozu, Nambubijin, etc. According to the manager, the izakaya carries about 30 types of sake, focusing on and sake.


Being very happy with such a variety of sake, I thought this izakaya was a good place for going alone for some good sake. I thought I would be able to sit at the counter and enjoy talks with the izakaya manager if the place was not very crowded.