August 16, my kimono ladies and I visited the small village called Sakai in Okutama Town, Tokyo to see shishimai (lion dances). These dances are dedicated to the god of the Shirahige Shrine in this village and, according to local residents, these dances mean their prayer for rich harvest, rain-making rituals, and things.

We drove the car westward on the Ome-kaido street, which runs along the JR Ome Line, passed by the Okutama Station, continued driving along the meandering road along the valley, and went through several tunnels. We took the left immediately before the bridge named "Sakai-bashi," pulled over the car on the road shoulder. The place where shishimai was being performed was just in a five-minute walking distance from the car. We walked across the bridge, took the right immediately after the bridge, proceeded in the paved road in mountain through the grove of cider or cypress.

Cicadas were buzzing, and, among the buzzing, we began to hear bamboo fifes playing a treble part. The fifes were sounding in the sky, which already exhibited a subtle nuance of autumn. As we were approaching the shishimai place, the sound of music was getting louder. After a short while, we found the two longer-than-is-wide banners of the shrine flying high in the wind on two long poles. 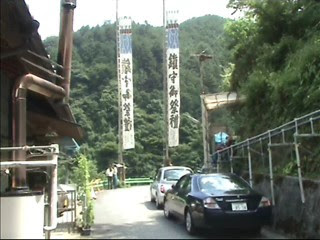 Soon, the road forked and we took the right-hand path, which is a steep downward slope leading to a small open space, where three lions were already dancing. The dance, however, was over in five minutes or so, and the band of performers walked out of the place marching in a row to the tune of fifes and drums. As we believed that they would soon come back and start another performance, we waited for it.

After a short break, the performance started again, and it continued for about 40 minutes. The three performers who were costumed as lions were moving vigorously. Although the performers were in a mountain zone, the blaze of the summer sun were torturing them ruthlessly. I was sure they were having a hard time in continuing the dance for 40 minutes without a respite.


By the way, the style of this performance is called sanbiki-shishimai (three-lion dance) and is generally accompanied by the music of bamboo fifes, drums, and sasara (musical instrument made of bamboo and is used to make rubbing sound). The drums were not so big that the performers could tie them to their waists with cord. They danced with beating the drums. "Tom-tom tom-tom," the drums made dry rhythmical sounds while the high note of the fifes shook the clear air of the mountain. Sasara made rasping sounds, which were somehow low-keyed but playing an important backseat role.

The simple phrases of the fifes and drums, which were played over and over, came into my brain through the ears until the phrases became able to automatically be played back in my brain endlessly even after the music stops. However, although the music was the simple repetition of the same phrases, it never made me sleepy, but it paralized some functions of my brain and deprived me of the sense of time elapse. This day, we intended to spend 30 minutes or so to see the performance, but we had been staying at this place for over 90 minutes when we noticed.


Today's Sake
Three Sakes Brewed by Using Ice Stalagmite Water of Kurobe
I bought the three sakes below after visiting the Tateyama and Tsurugi-dake Mountains of the North Japan Alps. All of these sakes are brewed by using the water of ice stalagmites that are formed in the Kanden Tunnel, which is used as the dedicated trolleybus route connecting the Ougizawa Station in Omachi City, Nagano Prefecture, and the Kurobe-dam Station in Tateyama Town, Nakashinkawa-gun, Toyama Prefecture. At midwinter, this water is frozen in a moment soon after springing up from the bedrock, and every drop of the water accumulates to form stalagmites. However big is such a stalagmite, it is mono-crystal and almost free from contained impurities.
- Dokutsu-no-shimpi Hyojunsui-jikomi (Daisekkeishuzo)
- Kurobe-no-hyojunsui-jikomi Kinrankurobe Junmaiginjo (Ichinoyashoten) Miyamanishiki 100%
- Hakubanishiki Junmai Karakuchi Genshu Hyojunsui-jikomi (Usuishoten) Miyamanishiki 100%
These one alcohol-added sake and two junmai-type sakes are common in their light and flinty flavors, and taste quite dry. I wonder such flavors originate in characteristics of the hyojunsui (ice stalagmite) water? It may quite a "strong water." 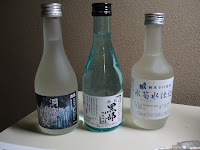 August 3, My friend and I visited Nagaoka City, Niigata Prefecture, to see fireworks. The city's fireworks are quite famous in Japan and some people say this fireworks display is the best in Japan. Anyway, we left home early in the morning, traveled to Nagaoka City by Shinkansen bullet train, got to the city shortly after 11 o'clock, visited a sake brewery, saw fireworks, got on a night train, and then came back in the morning of the next day. Somehow a forced march.

In front of the Nakagoka Station, I found this structure. What do you think this is? (See the end of this article for the answer.) 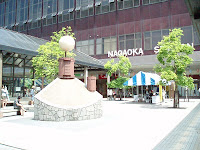 One of my friends living in this city drove to the station to pick up us. He took us to a sake brewery in the city. Actually, this brewery is operated by him and his family. There, we were treated to a good sake, daiginjo that this brewery entered in the new sake contest. This sake smelled brilliant and tasted mellow. Quite a nice sake although it was aged and, according to my friend, changed in its taste.

By the way, we used kikijoko, or sake-tasting cup, to enjoy this sake. I found that this cup is really big! It can even sufficiently contain a beer can. 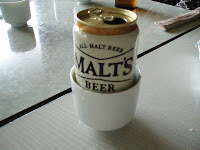 Late in the afternoon, we moved to the dry riverbed of the Shinano River, where people could sit down to see fireworks. True to its reputation of the Japan's best firework display, there are so many people at the fireworks-viewing site. However, the riverbed of the Shinano River was too broad to completely be occupied by this many people, and I didn't feel so much that the site was "crowded." 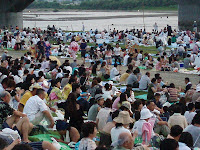 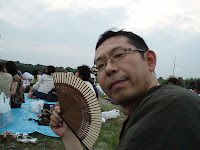 Unlike fireworks display held in many other places in Japan, they can prepare many firework launching spots because they, I guess, can use a broad shore of the Shinano River. And, the sky of the Nagaoka City serves as a big screen for displaying large-scaled art of firework. In the end of the show, they blasted off big shots of fireworks into the sky in the entire field of vision from as many as five launching spots at the same time, and, moreover, this continued for a minute or several minutes (I didn't measure the exact time). I am sure this was the greatest fireworks I have ever seen! 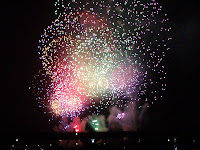 When I watched these fireworks lying on my back, the blast sounds strongly hit my chest and penetrated it to reach the ground, and shocked the ground. Then the ground, I felt, shocked my body again from my back. Ineffable majestic power and excitement ran through my body.
This was really great fireworks. Although the photos below cannot convey the power of these fireworks as much as I felt, here I place them. 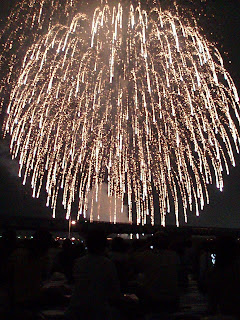 Well, we had some extra time after the fireworks display until our train left. So, quite naturally, we dropped in at an izakaya restaurant close to the station. It was quite a hot day, and chilled beer was nice! 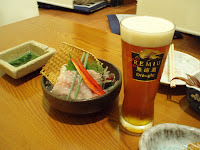 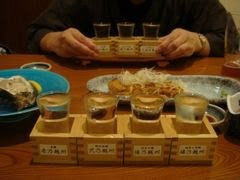 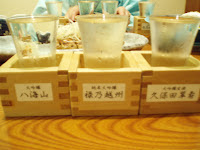 Answer: If you see this from the opposite side, you will find two fireworks launchers. 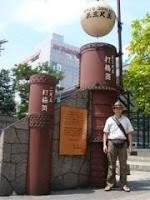