Our first beer garden party of this year was held at the open terrace of a restaurant of Tachikawa Washington Hotel on July 9.

Only I was wearing kimono in spite of the fact that this party was planned by my kimono friend and the party was intended for kimono lovers. Anyway, we can enjoy beer whatever outfits we are in.

We were anxious about the weather at first because of an open-air terrace. However, it was the day when the Meteorological Agency announced the end of this year's rainy season of Tokyo, and the weather was not so bad. The sky was somewhat cloudy, but it never started to rain. And, although we expected a humid evening, it was cool on the evening open terrace. 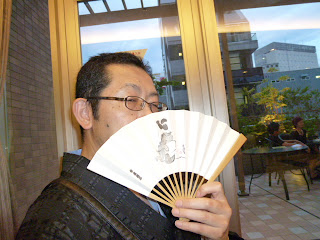 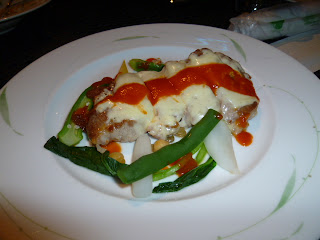 In addition to beer, this restaurant also carries other various alcohol beverages. You can reserve a seat with the all-you-can-drink course for two hours at 2000 yen per person (prices for foods are not included).

Since the all-you-can-drink course includes four Tokyo sake brands from the Western Tokyo, which is to say Sawanoi (澤乃井), Kasen (嘉泉), Tamajiman (多満自慢), and Chiyozuru (千代鶴), sake lovers can enjoy nice sake as well as cold draft beer. Nevertheless, beer is of course a main attraction of a beer garden.

With a concept of "local consumption of local foods," the restaurant uses delicious vegetables harvested in the vicinity of Tachikawa. Local vegetables are basically boiled or steamed and served to garnish main foods, scarcely seasoned, but fresh and rich in taste.


After leaving the beer garden, we dropped in an izakaya, Wagaya Uobei for some sake.

A waitress ushered us to an upstairs table, from which we could look down the hall over the railing. 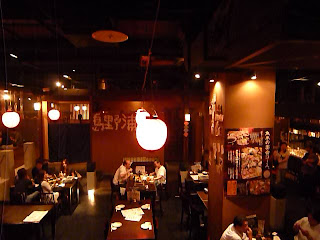 The red paper lanterns hanging down from the ceiling were lightening the hall dimly and softly. In a good relaxing mood, I could see waitresses moving briskly from table to table to treat customers. They were wearing short kimono. The bottom edges of their kimono were as high as their knees. They were pretty in such outfits. 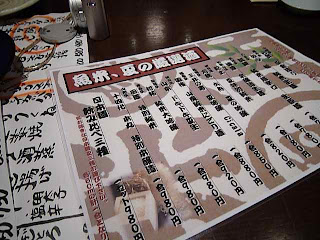 Besides the menu, I found a brochure, which has an article about Kamoshibito Kuheiji (醸し人九平次). So, I thought this restaurant might carry Kuheiji. Then, a member of our group asked a waitress whether they had Kuheiji, and in turn the waitress asked her which we liked, "Omachi" or "Yamadanishiki." This was a nice response of the waitress, wasn't it?

Well, I myself enjoyed the tasting set of Juyondai, Kokken, and Kid.

The foods of this restaurant, which use fresh seafood as main ingredients, were nice. Incidentally, the appetizer was prawn grill. The fresh skewered prawns were actually live, jumping on the grill while they were being grilled.