I visited the city of Kawagoe in Saitama prefecture on May 27. This city is also called Koedo (small Edo [Edo is the old name of Tokyo]), and old buildings are line along both sides of a street in an area of the city, where a lot of people visit for sightseeing. 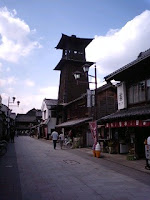 This time, I went to a kimono shop in this city to pick up my kimono that I had ordered the shop to tailor me previously in April. The kimono shop, called Kasama, is selling some types of material cloth for kimono, and among those, one type is called Kawagoetozan, which is specialty products of the city. Kawagoetozan is a cotton textile and not so expensive as a silk textile. However, woven from fine threads, it has quite a soft and smooth finish, even with a slight luster. If you want to enjoy wearing kimono frequently in daily life, Kawagoetozan is a right choice; this textile is low-priced, beautiful, and easy to wash because it is cotton. 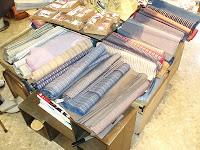 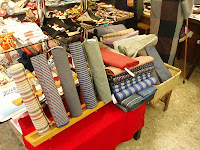 (Inside of the Kasama kimono shop)

This time, I payed 28,200 yen for my kimono including for textile and tailoring work. Since I am quite a tall guy as a Japanese man (actually, I am 188 cm tall), a bolt of textile is not sufficient to make my kimono and I always need additional cloth, which raises the price of my kimono. So, if you are not so tall as I am, the price of your kimono may be lower.

The photos below show my kimono. I have not worn it yet and I am looking forward to a chance to wear it. 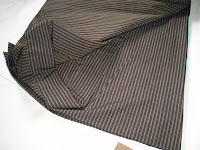 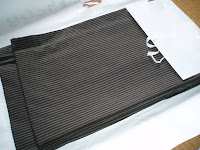 Today's Sake
Daishichi Junmai Kimono (Daishichi Sake Brewery Co., Ltd.)
I drank this sake in an Izakaya when I visited Kawagoe city last time to order my kimono on April 29. I think this is a typical Kimoto sake. Very bold and rich taste! Some people may like this but other may not. I like sake like this. 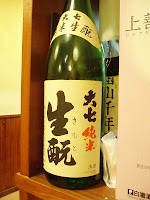 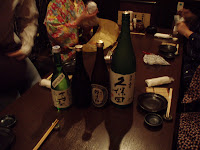 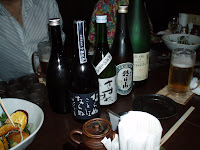 Last Sunday, we held a drinking party to try a new type of sake that has been brewed by using a new rice variety. The rice variety, called Koshitanrei, is a shuzo-kotekimai, which generically refers to the rice varieties suitable for making sake. Having Yamada Nishiki as mother and Gohyakumangoku as father, Koshitanrei has been crossbred in a 15-year cooperation of Niigata Sake Brewers Association, Niigata Prefectural Institute of Brewing, and Niigata Agricultural Research Institute Crop Research Center, and it was named Koshitanrei and registered as a new shuzo-kotekimai in 2004.

Yamada Nishiki, the mother of Koshitantei, is a very well-known shuzo-kotekimai. Many of the high-quality daiginjo sake products are made from Yamada Nishiki. In 1923, a new rice variety was crossbred by using Yamadabo as mother and Tankanwataribune as father. Then, its superior descendants were selected over generations and test growing was repeated for them to find the best variety. Thus, Yamada Nishiki was finally crossbred in 1936.

Meanwhile, having Kikusui as mother and Shin-nihyaku-go as father, Gohyakumangoku was crossbred in Niigata Agricultural Experiment Station in 1957. This rice variety and water of Niigata, which is a soft water, get along well with each other when sake is brewed by using them. In other words, the variety is suitable for making Niigata local sake, which is characterized by such words as "mild," "crispy," or "refined." Actually, over 90 percent of the shuzo-kotekimai harvested in Niigata prefecture is Gohyakumangoku. However, this variety has a disadvantage that it easily cracks during the milling if it is ground down to 50 percent or further to remove the outer part of the rice grains. This means that Gohyakumangoku is not very suitable for making daiginjo sake.

It is said that using Koshitanrei produces a sake that has a refreshing and crispy flavor attributed to Gohyakumangoku and layered flavors of Yamada Nishiki. So, we, as sake drinkers, had great anticipation this time. Although the registration of Koshitanrei was in 2004 as I described above, full-fledged cultivation of this variety started in 2006. This means that sake brewed by using this rice appeared for the first time in the general consumer market at earliest at the end of 2006. For the time being, we can drink Koshitanrei sake of the first or second brewery year.

This time, we drank Senbatsu Asahiyama (daiginjo) brewed by Asahi-shuzo. Asashi-shuzo brewed this sake by using Koshitanrei also for the first time.

This sake tasted so good that I could drink very much. It had quite a pure refined flavor, but at the same time it had a rich savor with a pleasant aftertaste.

By the way, each of us brought one's special sake to the party this time. We could enjoy different sake products, each of which was very nice. Thus, we had a pleasant drinking party. Thanks a lot to my friends! 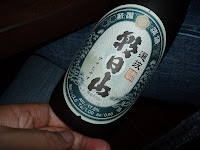 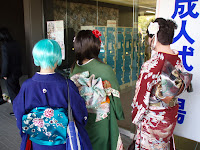 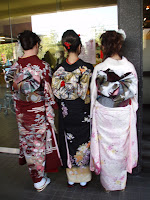 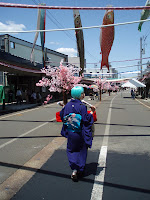 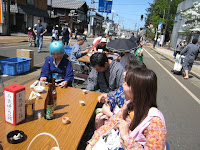 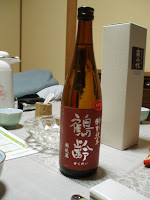 April 26, I accompanied kimono ladies to Kameido Tenjin Shrine, where Fujimatsuri (wisteria festival) was being held. 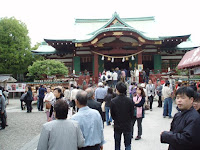 This day, we had a dress code; we had to wear kimono that had the color of wisteria violet. But I did not have any kimono including violet! OK, I wore violet tabi socks!

Hey, have a look at these beautiful kimono ladies! 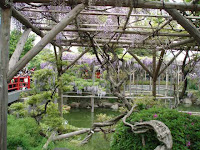 You can't see any kimono ladies? It may be difficult to find these ladies wearing violet in front of violet wisteria flowers...? But something is strange. Even I can see no one! Oh, I put a wrong photo!

This is the right one. 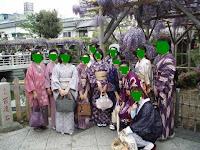 It's pity that men's kimono is not so colorful and fancy as women's kimono. I was again wearing the striped cotton kimono this day. I wish I could wear women's kimono!

Now then, Kisa, what are you wearing today? 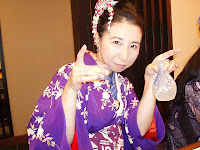 Oh, good! You're wearing cherry blossoms against the purple background. The motif of your ornamental hairpin is wisteria. And what sake are you drinking? I see, today's sake is Masumi.

Today's Sake
Masumi (Miyasaka Jozo Co., Ltd.)
Detailed data is not available. However, Masumi is famous for the fact that Kyokai Kobo No. 7 was found in moromi of the sake brewery making this sake in 1946 and that No. 7 kobo has widely been used across the country.
投稿者 いちべー 時刻: 4:51 PM No comments: