Yesterday, my friend and I went to an izakaya named Tenku (天空).

In this izakaya, the tables are arranged on both sides of the entrance door, and in the recesses was the kitchen surrounded by the horseshoe-shaped counter. Two young men were working busily there. Since it was a weekday and I guessed the restaurant was not so crowded, but there were actually many people there. Some who got to the restaurant later could not enter it.

Well, when we were seated at the counter, we ordered warmed Sawanoi Karakuchi. However, the waiter served it cold. My friend asked him to warm it, and we needed to wait for another several minutes. Finally, our warmed sake was served. Maybe, we should have ordered cold sake or beer as the first drink so that we did not need to wait very long.

I am glad to say that, as to foods, flatfish and tuna sashimi was nice and reasonably priced and sake was also sold at low prices.

There, I drank the following Tokyo sakes:

Sawanoi: Dry and quaffable regular sake. We drank this warmed first.
Kisho: Mellow and rich Junmai Ginjo. I like sake from this brewery.
Kasen: We drank Tamura this time, which has something sophisticated.
Tamajiman: Tama-no-Yorokobi has a soft and tender taste.
Chiyotsuru: Junmai Ginjo. I felt even a freshness of namazake. Is it due to good pasteurization technique?

In March of 2008, I went to Niigata to attend the Niigata Sake no Jin (Niigata Sake Festival) and took a Niigata Sake Bronze Expert Test there. Since then, I have frequently been visiting Niigata.

Can the taste sensation and olfactory sensation be enhanced? I think these types of ability are inborn and difficult to improve. However, there might be room for improvement in terms of knacks and techniques.

After having thought the above, I am planning to again challenge to the Gold Expert certificate, which I have almost given up before. So, I think I should become more familiar with Niigata sake, and I started the sake tasting training in preparation for the test in March next year.

Walking around in Kawagoe

On December 23, I went to Kawagoe City. At the location where the defunct Kagamiyama Brewery was operating before, there are some buildings with whitewashed walls, which used to be used by the company as facilities of sake brewing. These premises have been converted to a commercial establishment named Koedo Kurari. In this sophisticated place, you can eat food at the restaurant or enjoy shopping.

I think, already having the beautiful street flanked by kura buildings and other old buildings and the Kashiya Yokocho (Confection Side-street), Kawagoe will be more interesting city due to the start of its operation of Kurari. 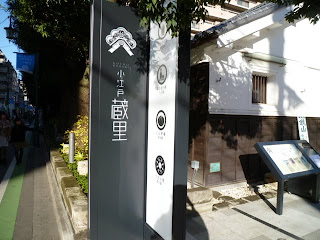 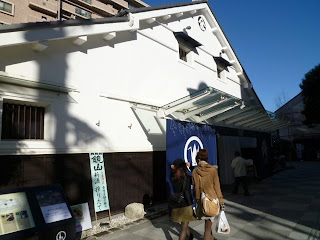 Well, I thought I would visit Kurari at the next chance, and I headed for Cafe Elevato. This cafe is often used as a meeting spot for us when we come to Kawagoe. Two friends of mine were already having coffee or tea when I enter the restaurant.

I ordered some vegetable chips and pastrami and draft beer, Coedo Beer Kyara, which was Kawagoe's beer I enjoyed after a long time. Naturally, the friends also ordered beer and we enjoyed drinking each drink. 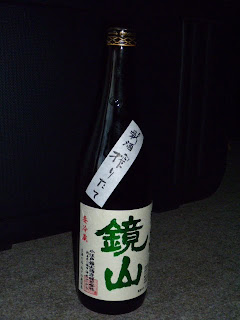 Around this time of the year, several types of just-pressed, unpasteurized sake including junmai ginjo and junmai are displayed and sold in the refrigerator. In the same refrigerator, there were bottles labeled as "Mutoka Nama Genshu," but I wondered what difference was between "Muroka Nama Genshu" and "Shiboritate." So, I asked the shop clerk about the difference. She answered that "Muroka Nama Genshu" was made from rice harvested last year. I thought this meant that the sake was made at the end of last year or early in this year and aged until this winter. However, I was wrong.

When I was asking further details about the sake, a worker of this brewery happened to come in the shop, and kindly gave me a clear explanation.

He explained that they kept rice harvested in the autumn of last year in their refrigerator and used it in this autumn to make this sake. Koedo Kagamiyama Shuzo is a very small brewery and they do not have a sufficient refrigerating installation, and they do not age winter-made sake over the summer season until the next autumn. A small microbrewery has its own challenges to overcome, which larger companies do not have.

Then, my friends, who were all women, headed for a kimono shop Tsuruya, while I decided to have a sole walk along the Taisho Roman Yume Dori Street and Crea Mall, since I was not interested in shopping in the kimono shop very much.

On the Taisho Roman Yume Dori Street, I was interested in a coffee shop. This coffee shop named Taishokan serves home-roasted coffee. From the outside, I saw two women in decent white-and-black uniforms were working in the coffee shop, which has an old-fashioned atmosphere.

I came in the coffee shop and ordered Ishigama coffee. There were a few customers and I could enjoy a cozy time. The home-roasted coffee was nice. Above all, a warm smile of a waitress made me relaxed. After killing some time there, I got out of the coffee shop and started walking toward the Crea Mall.

I got to the kimono shop Tsuruya and stayed there for a short time, and then moved to Cafe Pachanga. It was around three o'clock, when the Christmas gathering of kimono lovers was just about to start.

Kagetora from Miyagi and Urakasumi from Niigata

Recently, my friend and I went to an izakaya located in Akigawa City, close to JR Akigawa Station. Initially, we intended to drink at "Tenku," an izakaya, which is one-minute walk from the station, and this article would have told you that this izakaya carried Tokyo sake and we enjoyed sake from five sake breweries of Tokyo if there had been two vacant seats there. 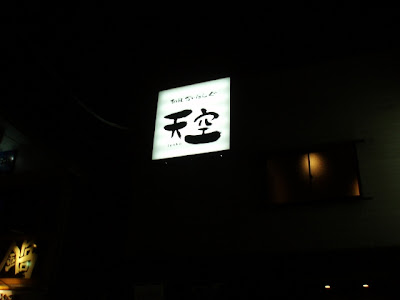 Thinking we will visit Tenku at the next chance, we walked around in the vicinity of station looking for another izakaya to enter. When I walked around there before, it was daytime and izakaya and other watering places were difficult to find, but those in the evening were like light traps and we were attracted to their lights easily like night moths. However, we needed to visit several izakayas to find vacant seats for us. The izakaya finally we were accepted to enter was located on an alley secluded from the main street.

As soon as I got seated, I looked at the sake menu, which listed "Masumi," "Kagetora," "Urakasumi," "Dassai," .... Thinking they had a good assortment of sake, I looked closer to determine what to drink. And, I found that there is a description of "sake from Miyagi Prefecture" on the left of "Kagetora," and "Niigata Honjozo" on the left of "Urakasumi"!! (Actually, there is sake named Koshino-Kagetora in Niigata Prefecture while Miyagi Prefecture boasts its prestigious Urakasumi.)

Well, I ordered "Kagetora" and drank it, and it actually tasted like sake from Niigata.

Oh, No! Forget about where sake is made. Just enjoy it. It's all right if the sake is good.

Surprised he should drink it undiluted!

The genshu (undiluted version) of this sake is sold around in May and June to be used for making umeshu (plum wine).

"Making of umeshu by using sake"


You can make umeshu from this sake much faster than you make one from shoshu. Actually, you need to wait for two or three months before you can enjoy good umeshu if you use shochu, while sake-based umeshu makes nice enough as quickly as about a week or two. You don't need so much sugar to make sake-based umeshu as you do for shochu-based one. So, the made umeshu will have a flinty and smooth taste.

By the way, this guy is drinking this genshu as it is.
I am surprised he should drink this undiluted! This is too strong since the alcohol content is 20 to 21%.


In addition, Okutama Yuusui-jikomi is also sold as Karakuchi Nigorizake (nigorizake version) around this time of the year. They are sake the sake from the same tank as different products by arranging it differently according to the seasons. Recently, I was given the Karakuchi Nigorizake by a friend. She also gave me radish pickled in sweet sake.

This radish picked in sweet sake is also a Sawanoi product. And I heard this is in short supply, and they ship this product to limited liquor shops only during December. Even Sawanoi-en, a shop directly operated by the brewery, does not sell it.

The Karakuchi Nigorizake was nice. Although I guessed this was a bit fizzy, which I am not very good at, it tasted mild. And, although it includes a lot of lees, it was a smooth and flinty, quaffable sake.

I am drinking Karakuchi Nigorizake with radish picked in sweet sake

November 27, my drinking friends and I met BBQ facilities in Ome City, Tokyo. We brought sake bottles (one or two bottles for each) there and had BBQ & sake party.

This place is, to our delight, very convenient because they provide guests with various tools and tableware. They had tokkuri (pottery flasks), choko (small sake cup), and kettles, so we could even prepare warm sake there. 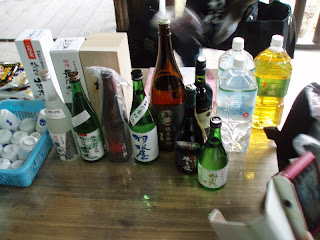 We made warmed sake using the leftmost bottle (Nagaokajo from Hasegawa Syuzou) and the tall brown bottle (Junmai Ginjirushi from Ozawa Syuzou) in the photo above. Both of these two bottles are nice when warmed.

In the video below, I drink Daiginjo Bon Genshu, which is a limited product of Ozawa Syuzou.


My jolly drinking friends and I are performing a skit in the video below. We had a 30-second arrangement talk and were filmed without rehearsal. Don't you think we were good actors?
The message on the back label of this sake bottle says, "This sake gleams in the mouth. See how it gleams.


At this time, I drank very much and fell asleep. While I was sleeping, these ladies ... !