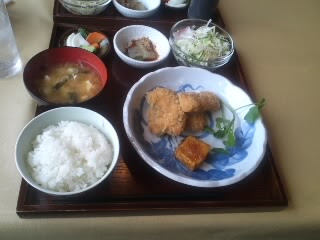 The portable kandouko is a cute and tasteful sake warmer. Since I got a small one in an auction on the Internet, I have often used this device to enjoy warmed sake. It is not such a large device for sufficient and steady supply of warmed sake for five or more drinkers, but it is a cool device for two or three drinkers. Low priced sake such as regular sake, junmai sake, and honjozo sake is good enough with this device.

You pour some water in a kandouko, and place burning charcoal in the brazier in this device. The heat of the charcoal warms up the water. So, you put a flask or another vessel containing sake in the warmed water and wait. Soon, the sake becomes warm.
(For details about the kandouko, see this post: "Finally got a kandouko (sake warmer)!"

The kandouko is not merely a sake warming device, but it also serves as a tiny hibachi. You can set a grill on the brazier and cook some food while warming and sipping your sake. You can grill dried fish, shiitake mushrooms, and other foods. This way of drinking may look somewhat poorish, but it is folksy, and I feel like I can flatter myself that I am a bearer of sake culture.

Lately, I am practicing a new way of using my kandouko; I warm canned food on the brazier

If you are interested in warm sake, how about getting a kandouko?

Shoot a target and get canned food!

After drinking at Sawanoi-en until early afternoon, we moved to the BBQ facilities Rengado Akatombo.

Rengado Akatombo has a large roofed BBQ site. On this day, it was rainy and food stalls were set up under the roof. A performance stage was also placed under the roof (the stage is set up outside in usual years, but it was a rainy day). On the stage, music, funny dances, Japanese traditional performing arts, and other performances were presented.

However, not being interested in such performances very much this time, we were busy drinking and chatting.

Almost all the seats were occupied at the large roofed BBQ site. However, there was another building across the yard beside the roofed BBQ site. In this cabin-like building, there were a few tables with seats, some of which were still vacant. In this place, visitors could enjoy a shooting game. A player of this game was to mount on a machine horse back like one known as the brand name of Rodeo Boy. This machine, moving up and down, right and left, and back and forth, makes it difficult for a shooter to aim at a target. You can shoot three times for 300 yen. If you hit a target, you will be given a can of food.

By the way, I saw an acquaintance when we left Sawanoi-en, and she recommended wasabi croquette sold at Rengado Akatombo. So, I bought it and ate it.

This croquette was like a usual potato croquette but it included wasabi stems and leaves. In addition, the woman at the shop spread a lot of green wasabi paste on it before giving it to me. The croquette was spicy and tasty.


At the table, while eating the wasabi croquette and drinking Ichiban-gumi Nigori, which was a special version of Ichiban-gumi and sold only at this place, the president of the brewery appeared. Since I often go Sawanoi-en and attend various sake-drinking events held by the brewery, I have acquaintance with him. So, he kindly brought us some delicious gyozas. By the way, these gyozas were sold by a restaurant, which is usually operating near Okutama Terminal Station on JR Ome line. Once, I went to this restaurant, but all the seats were occupied at that time and I couldn't eat any. So, I was happy that I could eat these gyozas this time.

Also, women sitting in the place just beside me kindly gave us a food can, canned mackerel boiled with miso soybean paste. They said they tried a shooting game, successfully hit a target, and won this can. Thanks! 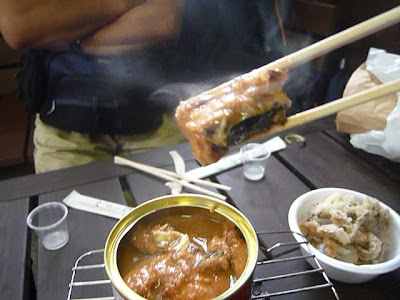 We ate this canned food after boiling it directly with a spirit lamp. Hot boiled mackerel was nice with Sawanoi sake. Maybe, I want to try this style for myself later.
投稿者 いちべー 時刻: 10:25 AM No comments: 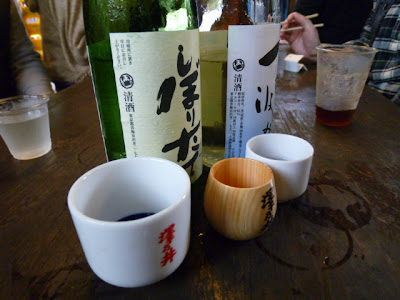