The Tama Monorail line, crossing JR Chuo line at right angles near Tachikawa Station, runs north to south. It is quite a short line and, actually, it takes only 36 minutes to travel from Kamikitadai, the north end station, to Tama Center, the south end. The event of "Tokyo Sake Train 2011 Autumn," which chartered a monorail train of this line, was held on October 1. The participants could enjoy the ride of this train while drinking various sakes brewed in Tokyo. I was among the participants on this day, the sake day, a perfect day for enjoying sake!

My friend and I, after going through the acceptance procedure At Kamikitadai Station, got on the train, found our specified seats, and got seated. The cars were just ordinary commuter cars having long benches on which passengers were to be seated their backs facing against the windows. However, this time, tables had been brought in each car, and arranged between the benches. Placed on the tables were bottles of Tokyo sake.

After leaving Kamikitadai Station, the train was to go to Tama Center Station, and it was to turn back and reach Tachikawa Kita Station. Then, the event was to be over. The travel time between Kamikitadai to Tama Cneter is 36 minutes and Tama Center to Tachikawa Kita is 24 minutes. So, actual time of our ride was only 50 minutes. Don't you think this time length is too short to enjoy sake to your heart's content?

Actually, this train had a long stop of 55 minutes at Tama Center. During this stop, the participants could continue drinking at their seats, visit other cars to find any good sake or people to talk with, or get out of the train to move onto the platform. On the platform, a live concert by President Ishikawa of Ishikawa Brewery, the producer of Tamajiman Sake, was being held. So, this event was more enjoyable than I expected. When the train was stopped, we could easily walk around in the cars and had no difficulty to pour sake

After having a look at the Saru-hashi Bridge, I want to drink Gokyo.

September 9, 2011. Heavy rainfall that was brought by Typhoon 12 to various areas in Japan had changed the water of the Katsura River, which I suppose usually is a clear stream, in to a murky torrent. The flow was crushing with roaring sounds into rocks and cliffs of the gorge. Above the torrent, against a background of a clear blue sky, is some elaborate structure connecting the cliffs on both sides. This is a bridge called Saru-hashi, one of the Japan's three unusual bridges. 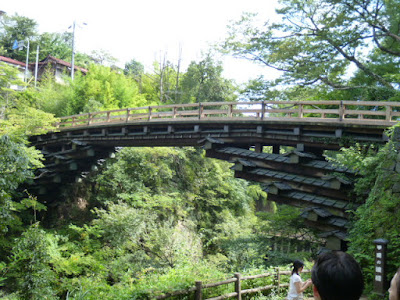 The Saru-hashi Bridge is a wooden bridge spanning the Katsura River running through the Ohtsuki City, Yamanashi Prefecture. This bridge has uncommon structure. The following explains how this bridge was constructed:
1. Holes were bored on the cliffs on both sides of the river.
2. Square timbers were inserted in the holes so that the timbers jutted out from the cliffs slightly upward.
3. The second timbers were laid on the first timbers jutting to the air. At this time, the second timbers jutted farther into the air than the first timbers.
4. Then, the third timbers were laid on the second so that the third timbers jutted farther than the second.
5. Thus, timbers were laid on timbers, and the jutting structures on the both cliffs grew close to each other.
6. When the jutting structures become close enough to each other, the upper part of the bridge was placed on them.
7. In this way, this bridge was constructed.

This beautiful wooden bridge has tiny roofs on each of its beams and timbers to protect them from rain, boasting elaborate and splendid architecture.

By the way, when watching this bridge, I naturally came across the question that what are the rest two of the Japan's three unusual bridges. So, I conducted investigation and learned that one is the Kintaikyo Bridge in Iwakuni City, Yamaguchi Prefecture. As to the other, there seem to be several assertions. Some say it is the Shinkyo Bridge in Nikko City, Tochigi Prefecture, others say it is the Kazura Bridge in Tokushima Prefecture.

Anyway, it seems that at least the Kintaikyo Bridge is counted as one of them. This bridge has four bridge piers, and three small wooden arches connect these four piers. Another two wooden bridges connect the outer-most two piers with the banks on both sides of the river. Thus, a total of small five bridges are connected, forming one long bridge. I have ever seen this bridge on TV, but I have never visited there to see it. Some day, I want to see it.

By the way, did you know that the Kintaikyo Bridge is also called Kintai Gokyo (Kintai Five Bridges)? Did you know sake named Gokyo produced in Iwakuni City was named after this bridge?

So, my thought started at the Saru-hashi Bridge and finally came to sake! Suddenly, I wanted to drink Gokyo. Yes, yes! I really wanted to drink it while thinking of that beautiful Kintaikyo Bridge.

I went out to the liquor shop nearby and got this sake.