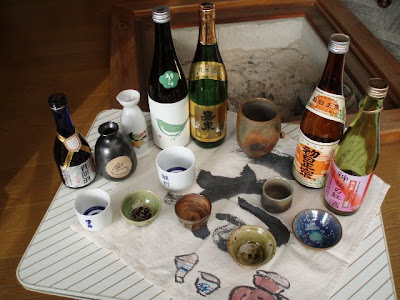 I like to invite friends to my place and have a party. One good point is that drink and food we need do not cost so much compared with when we drink at a restaurant. I can ask each member to bring some food and drink, and we can share food, drink, and a good time.

Several bottles of sake I had purchased were stored in my refrigerator. So, this time, I took all of these bottles out of my refrigerator and put them on the table to treat my friends. In addition, I also wanted to drink some namazake, so I went to a liquor shop and bought two bottles of namazake.

Five people attended the party, and four were women. I didn't intentionally tell only women to come, but in reality only women came to my place on this day. Anyway, I drink sake happily when many women are around me.

A party attended by many women is lively and merry, isn't it? Women talk like machine guns without interruption, and it is very difficult to interrupt them with my words.

Well, as to sake on that day, I prepared these bottles shown in the photo below. Besides them, there was another bottle of aged junmai ginjo sake, which was brought by one of my friends. 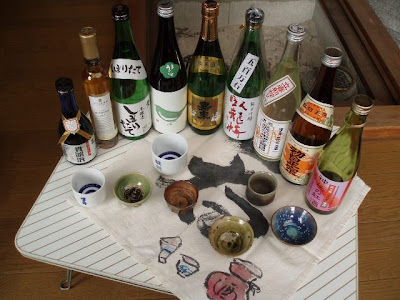 In the figure above, did you notice a bottle of ice wine, the second one from the left? I was given this bottle by a Canadian friend of mine. She is also a great sake lover and came to Japan to explore the world of sake last year.

We poured this ice wine to small glasses and started our drinking party with it. The wine has made from grapes that had repeatedly been frozen and thawed over cold days in a severe winter of Canada to concentrate sugar inside them. The wine tasted sweetish and had fresh acidity. The taste reminded me that of umeshu, or plum wine.

Whether it is sake or wine, what is made with loving care tastes good. Thanks to the friend who brought this wine to me, thanks to those who made it. 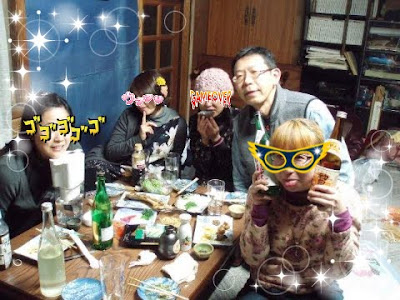 In addition to the ice wine, we enjoyed some bottles of sake, which were as follows:

Shinpi-no-Benizake by Buko Syuzo: purplish sake brewed from kodai-mai, an ancient rice variety. The brewery generally makes dry sake, but this one was sweetish.

Kasen Junmai Sake (gold foils added): This bottle seemed to be intended for the last year's "New Year" season but was left unsold on a shelf. I purchased it at a bargain price. The brewery of this sake makes nice dry sake, and this sake also exhibited characteristics that well representing the taste of the brewery. Whether gold foils were added or not had nothing to do with the taste.

Garyubai Junmai Ginjo Nama Genshu: As I expected, this was the most popular among those who were at the party. Personally, I like it better if it has more dynamism of namazake. I usually seek dynamism rather than gracefulness in namazake.

Niwa-no-Uguisu Tokubetsu Junmai: I purchased this sake when I traveled to Fukuoka prefecture last year. By the time we drank this sake, I had drunk quite much and I was so tipsy that I could not understand details of the taste of this sake. Nonetheless, I understood this was good sake with rich rice flavor.

Sawanoi Junmai Ginjo Koshu (brewed in 2000): 10-year old sake. This golden yellow sake has rich bouquet of aging. When warmed, it increased its mildness in taste.

Kisho Honjozo Shiboritake Namazake: This sake has a forceful flavor with full of liveliness, which is difficult to find in sake from a brewery other than this brewery.

Kijoshu of Toshimaya Syuzou: Kijoshu is a type of sake brewed with a special method; they use sake instead of some part of the mother water to prepare fermenting mash. We wound up the party with vanilla ice cream topped with this kijoshu. Sweet ice cream with bitterness of sake was nice for dessert!


Sake Quizzes
I made quizzes that test your sake knowledge. Challenge my Sake Quizzes.

Seek for Traces of Defunct Brewery

"Tokyo no Jizake" (or sake of Tokyo), a book written by Hiroyuki Koda, tells that there are 18 sake breweries in Tokyo, and provide information on each brewery including brewery's history, brands, and characteristics of sake. So, it is an interesting book for sake lovers. Actually, this book was first published in 1981, and the number of breweries in Tokyo has reduced down to 12 by now. The consumption of sake in Japan is decreasing year by year, and it is really a pity that several sake breweries in Japan discontinue their operation and disappear every year.

According to the book, the brewery was operating in Daimon, Ome city. This place was not very far from my home. I thought I would possibly be able to find something related to the brewery; for example, I would find the brewery's well of mother water. So, I suddenly decided to go to locate this place.

From Kabe Station on JR Ome line, I started walking northward, went across the Ome Kaido Avenue, and reached an intersection on Route 63. At this place, a signboard guiding visitors to Shiobune Kan-non Temple, a historic temple in the Kanto area, was displayed. It is said that the place name Daimon, which literally means a "big gate," is derived from the fact that there was a big gate of the temple somewhere in the district that is now called Daimon. 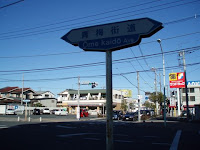 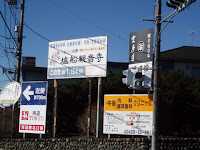 In order to arrive in the district of Daimon, I had to go eastward from this intersection, but, at this time, I went further northward for several ten meters. Then, I reached the top of a hill where I could have a panoramic view of a sunken area below in front of me. I had learned that a stream called Kasumi River was running somewhere in this depression. I could see mountains in the Okutama area on the left in the distance. It is very likely that springs flow from the base of a hill like this. So, it seemed that the brewery had been located in a good place where they could obtain good mother water for sake brewing. 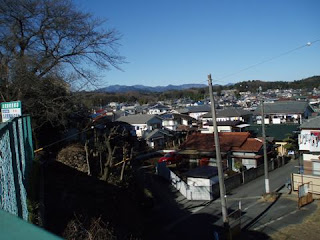 After observing the terrain around the place, I went back to the intersection on Route 63, and walked eastward. An about 400-meter walk brought me to a point where the road forked. There, I took the left way. 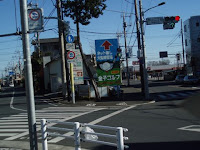 I continued walking for a while to find the intersection named "Daimon." Here, I took the left, proceeded on, and soon found a signboard indicating the direction of Daimon Library. If I had referred to some historical materials of Ome city in the library, I would probably have found good information on Igarashi Syuzou. However, it was January 2 and the library was on a New Year's holiday. 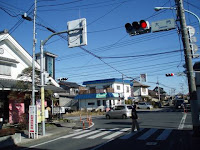 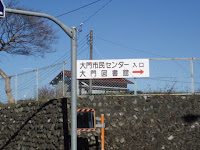 After passing the library's signboard, I went down a slope, and then I crossed Kasumi River, while thinking the brewery might have been around here since the environment in this vicinity seemed convenient to obtain mother water. 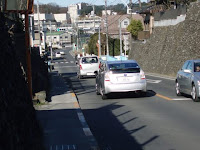 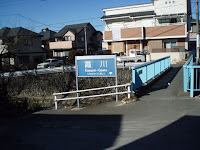 Leaving Kasumi River behind, I proceeded northward to find another small stream. This was Daimon River. This vicinity also looked very suitable for a brewery to make sake, but I could not find any traces of the brewery such as an old chimney or earthen buildings on large premises. 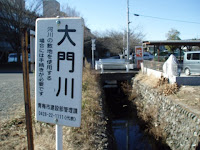 I also went across this river and continued going on the road, which finally lead me to Shiobune Kan-non Temple. Several fair stands lined up along the approach road of the temple, producing a New Year atmosphere. 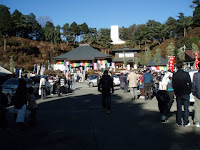 Thus, I walked, walked, and walked here and there, and guessed that the most likely places as the whereabouts of the brewery were between the two rivers. So, I returned to a place near Daimon River, also partly because I wanted to have lunch at the soba restaurant near the river. 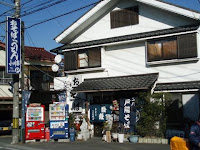 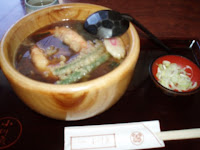 I ate tempura soba in this restaurant and asked the woman working there whether there had been a sake brewery around here. Sure enough she answered "Yes there was. It was just there." 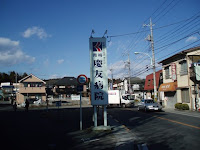 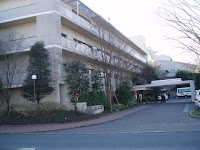 According to the woman, the brewery was operating on the southern side of Daimon River, where there is currently a hospital. She said the owner of the brewery started lending the land where the brewery was operating before to the hospital after the brewery discontinued business. Now, any traces of the brewery are not found there. Actually, it is not very meaningful even if I have located the place of the defunct sake brewery, but I felt somehow satisfied. Since I walked for long time that day and felt quite tired, I relieved my fatigue in a public spa, "Ume no Yu," close to JR Kabe Station, and then went home.
投稿者 いちべー 時刻: 3:38 PM No comments: