In a series of sizzling, muggy days like these days, even I, who usually prefer drinking sake, want to go for some cold beer once in a while.

So, my friend and I went to beer restaurant Neu Frank in Kunitachi City, Tuesday.

It was a small restaurant that had about 20 table seats and several seats at the counter. They are carrying various types of beer from Belgium, Germany, and other countries. I think I like German beer in this hot season.

We ordered sausages, souerkraut, baguette and patty, salad, etc. and drank different beers. Beers came with different glasses or mug that had original shapes and designs for each brand. 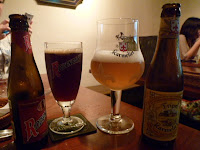 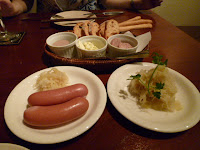 Maybe, when I suddenly want to have some beer, this is a good place to go, because there are counter seats. While nibbling baguette with patty, I would drink alone.

Today's Sake
Kamikokoro Tokubetsujunmai Tokagen (Kamikokoro Shuzo)
This is rich, full-bodied sake. I can discern a flavor of koji in this sake. It can be enjoyed at a room temperature, or with warmed or a bit cooled down after being warmed.

Last Saturday, friends and I visited izakaya Hakobune in Shinjuku Ward to attend the Gathering for Surrounding the Brewery Head of Tsuruno Shuzoten, the maker of Tani-izumi brand sake.

Tsuruno Shuzoten, operating in Noto, Ishikawa Prefecture, uses a fune-shibori method or fukuro-shibori method to press sake, instead of using a modern yabuta sake pressing machine that is widely used by sake brewers in the country. According to Mr. Jinichi Tsuruno, brewery head, it is impossible to make sake that exhibits such round sweetness as Tani-izumi sake does if they use a yabuta.

That figures! Having a mouthful of the sake, I discerned that delicate, tender sweetness rippled to permeate my tongue. Especially, the mild and rich taste of the regular sake of this brewery was very uncommonly impressive. (Moreover, every participant was given a one-cup regular sake when returning home. So, I can enjoy the Tani-isumi regular sake again later.) 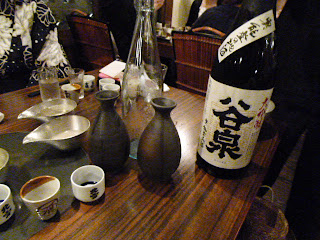 And, when I drank the nama-genshu sake, of course my tongue felt that pleasant waxy sensation, which is peculiar to the non-pasteurized sake. If you are a big namazake fan, you would like it. I drank this genshu paired with charcoal-grilled Japanese wagyu steak, and I would have had some difficulty to stop drinking this sake if there had been enough steak. 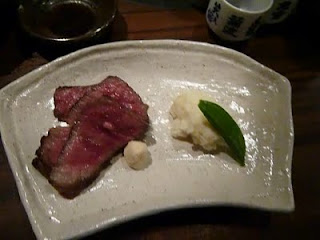 The nigori sake was also nice. It was quaffable with a flinty, sweetish taste.

This time, they had prepared various types of Tani-izumi including the regular sake, honjozo, genshu, daiginjo in plenty, and the participants could drink to their heart's content. Also, foods to be paired with were also gorgeous. So, I was quite satisfied. 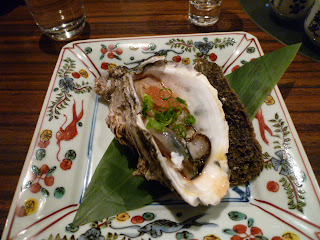 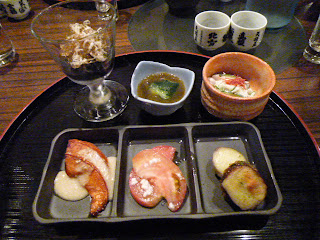 On one Saturday in June, I visited Buaiso (武相荘), the former house of Mr. and Mrs. Shirasu. Mr. Jiro Shirasu was a prominent personality who played an important role in the Japan's negotiation with the General Headquarters of the Allied Powers over various post-war processes, in the conclusion of the Treaty of Peace with Japan, and in other critical tasks that had a great impact on Japan after the war. Mrs. Masako Shirasu was an essayist and loved antiques. The house stands at a distance of an about 10-minute walk from Odakyu Tsurukawa Station.

After paying for my admission and entering the premises, I found a building that looked like a stable or garage. There was a black-bodied vintage car, Paige Fleetwood Six-38, in the stable. The car is a collection of Wakui Museum, a classic car museum in Kazo City, Saitama Prefecture, and had been brought to this place for exhibition.

I hear that Jiro was given a car of the same model of this exhibited car by his father and was driving it around when he was still a junior high school student. Equipped with the wooden steering wheel, rear seat with an enough clearance for the passengers' knees, black-leathered interior, and other beautiful parts, there were stateliness and an inspiring aura about this car. 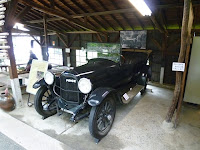 After seeing the car, I went through the front gate of this house, and found a big persimmon tree behind the gate. This tree was said to be as old as about 200 years. The main house was seen beyond the gate. This thatch-roofed house has the structure that was quite common to general farmhouses in old days. The roof appeared to have been thatched recently, because the edges of the eaves looked so sharp against a background of the cloudy June sky that I could discern the clear shear cut of each stem of pampas grass used for thatching.

On the east end of the roof ridge, inscribed was the kanji character "寿," which means to celebrate auspiciousness. Incidentally, on the west end, they inscribed the character "水" (water), a charm against fire disaster, at which I missed having a look. 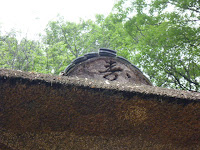 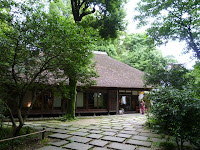 The main house was open to public and you can enter the inside to see the interior and exhibited items, but unfortunately taking pictures is forbidden inside. I went into the house from the entrance on the right of the south-facing building, and I was in the guest room, which had formerly been a space called doma (earthen floor). Mr. and Mrs. Shirashu laid a floor and converted this space into a Western-style room. When you face west from the doma, there were a room with an irori hearth on your left and another room on your right. And, there are two other rooms beyond these rooms. This is a typical floor plan of a farmhouse in old days.

One of the basic characteristics of old-days Japanese houses is that rooms are not connected by corridors but they are partitioned by thin sliding doors made of wood and paper. And, I could see how Mr. and Mrs. Shirasu had been adding their taste to the house based on this simple structure of the building so that they could make the house convenient and enjoy living. I think that it is enjoyable that I can adjust my living environment flexibly by reforming the interior or newly adding new items to the house according to my needs that change as I live there, instead of designing my house plan fixedly and defining specific use for each room from the beginning. Also, I will become more attached to my living environment if I have such a way of living.

In the front garden, several types of flowers such as gillyflowers are in bloom. The gray, cloudy sky finally began to shed its tears. The rain, which didn't seem to stop so soon, was wetting flowers and grasses, and the comfortably moist space extended to the bamboo grove behind. Hearing raindrops on persimmon leaves and looking up, I saw leaves and young persimmon fruits, which appeared freshly glistening with rain. Visiting Buaiso was a pleasant experience even in a rainy, damp season.


Today's Sake
Yamahai Junmai Katanozakura Muroka Nama Genshu (Yamano Shuzo)
I recently found this sake at an izakaya in Tachkawa I frequent. The sake has a meaningful taste with moderate acidity. This is definitely one of my favorites.

Sawanoi Junma Ginjo Namazake Nigorizake (澤乃井純米吟醸 生酒 にごり酒)
Usually, I don't drink nigorizake very often since I think nigorizake is somewhat sweetish and I don't like the sweetness in sake very much. However, this sake is quaffable and OK with me. It is slightly fizzy.


Tokubetsu Junmai Aramasa Rokugo Namazake (特別純米 新政六號 生酒)
This sake is dry sake and, at the same time, meaningful with a rich taste and clean bouquet. Sweetness, slight bitterness, and moderate acidity exist in harmony. I drank this sake in big gulps.


Daiginjo Tenryo Koshu (大吟醸 天領古酒)
A 720-ml bottle of this daiginjo sake is sold at the price of 1,575 yen, which I think is a reasonable pricing. And, I am satisfied with the quality of the sake. The word koshu makes me to think of yellowish to amber-colored sake with a special fragrance, which results from aging and somewhat resembles the Chinese Shaoxing rice wine. However, this Tenryo Koshu, a product that has been aged at a low temperature for three years, hardly has little aging bouquet. This sake has a very pleasant taste, which is mild, smooth, and moderate. I like this sake.