Recently, I bought an interesting sake product from the shop of Reijin Shuzo (麗人酒造) in Suwa, . This is called Matsutake-sake, a bottle of sake with matsutake mushrooms in it. Matsutake is very popular and expensive mushroom and Japanese people like matsutake so much that they import the mushroom from , , and other countries.

In the bottle, there are cut matsutake. So, I thought, we could grill and eat the mushroom while drinking this sake, and I called some friends to held a party. 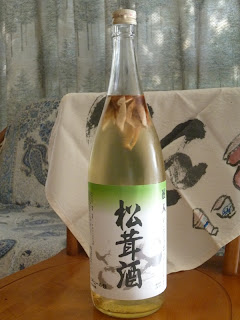 Another theme of the party was yudofu. Yudofu means boiled tofu. We place pieces of tofu in hot water to warm up them, and enjoy tofu hot. To enjoy the original taste of tofu at the maximum, we boil tofu just with a piece of kombu (kelp, or Laminaria japonica), and no complex recipe is necessary. We dip the warmed tofu in soy-based sauce and eat it.

And, to make the party more attractive, this time I introduced a new device for yudofu, which is called yudofu-oke (wooden pail for making hot tofu). The pail is made of sawara cypress and equipped with a brazier in which burning charcoal is to be placed. When you put water in the pail and burning charcoal in the brazier, the heat of the charcoal warms the water. So, you put cut tofu pieces in the water to warm them up. 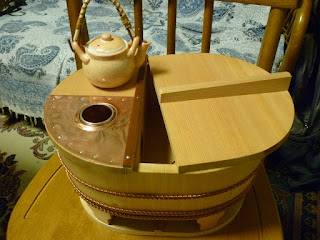 However, I had some problems about the yudofu-oke. The opening of the brazier was small and I can put only small pieces of charcoal in the brazier. Also, the brazier itself is not very big to contain much charcoal. Maybe, yudofu should not be eaten at so high a temperature, or I can preheat water with another pan or kettle. 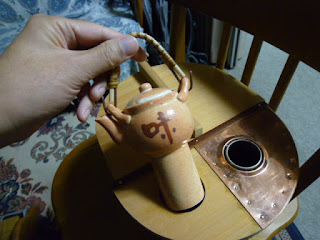 Well, what about the matsutake sake? The sake was in a 1.8-litter bottle, and I had some difficulty to take out the mushrooms. The mushrooms were first floating in the upper part of the sake, but later they sank deep in the bottle. So we need to empty the bottle first. We were five people, and some kindly brought 720-ml bottles of sake. So, we had another three 720-ml bottles. After emptied these three bottles, emptying another big bottle was hard for us. After all, I needed to move some of the sake to an emptied small bottle.

The matsutake sake has a slight smell of the matsutake mushrooms. The mushrooms, which we grilled and ate, tasted alcoholic from being soaked in the sake for a long time.
投稿者 いちべー 時刻: 5:56 PM No comments: