THE TWISTARS and Kusu Match Well

THE TWISTARS held a live performance July 17, in Dachibin, an Okinawa restaurant & bar near JR Koenji Station in Tokyo. I went there to enjoy their music and Okinawa food.

THE TWISTARS matches Okinawa food. Maybe, this is because Mr. Akira Kawabata, one of their members, is from Yoron Island (this island is close to Okinawa and shares culture and folkways with it) and pursues solo stuff in Okinawa prefecture. Actually, their music has a kind of Okinawa taste. 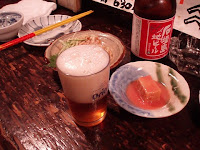 They had also Okinawa sake in this restaurant. The sake is called Reimei, brewed by Taikoku Shuzo. 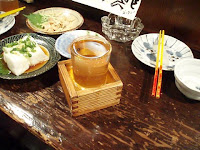 The sake Reimei at this time seemed to be honjozo sake. It was dry and bold sake and reminded me of sake from Nada, Hyogo prefecture. I think hot areas like Okinawa do not yield much sake, and it was a surprise that they are producing such good sake in Okinawa prefecture.

Today's Sake
Ginjo Nakagumi 2008BY Namazake (Ozawa Syuzou)
The sake has a modest aroma (I usually favor modest aroma than too much fruity ginjoka). When I take a sip of this sake, my tongue feels stimulation characteristic of namazake, but soon it finds a mild taste. Leave this sake for a while after taking it out from the refrigerator. This sake will soon reveal its elegance and gracefulness.
Rice used: Gohyakumangoku and Miyamanishiki
Seimaibuai: 55%
Alcohol: 17.0 - 18.0%
Sake meter value: (+)3
Acidity: 1.7
Amino acid: 1.1 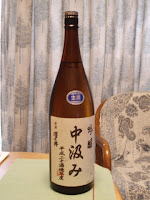 Before, I posted the article titled "Complicated Sake Name" at my blog site. In the article, I expressed my opinion that sake naming conventions that are currently used, including the tokuteimeisho (special designation sake name) system, are difficult to understand for general consumers, and suggested that other simpler names be used for classifying sake.

According to this classification system, sake is divided into four categories: kunshu (fragrant type), soshu (light and smooth type), junshu (rich type), and jukushu (aged type). In addition, this system determines the type of specific sake not according to the ingredients or brewing method of the sake but based on human's sensory evaluation of it. Of course, everything has good points and bad points. For example, it may be difficult to determine the type of a junmai ginjo namazake whether as a kunshu or as a soshu. However I think this system is convenient because it is easy to understand for general consumers. 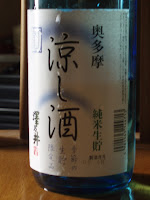 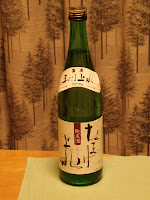 For example, you are told that some specific sake is soshu, you easily guess it tastes light and smooth without needing to know terms like junmaishu or namachozoshu. Thus, under this classification system, Sawanoi Junmai Namachozoshu Suzushizake (the picture on the left) can be called a soshu, while Kasen Junmaishu Tamagawa-josui (right) can be a junshu.

When introducing specific sake to people who are not familiar with sake, you may feel difficulty in conveying the meaning of difficult sake terms including junmai, junmai-ginjo, etc. However, if this classification system is used, you even need not explain the meanings of such words. If Japanese sake brewers want to expand their market worldwide, I think the use of this classification system is encouraged.

The Web site I mentioned above also provides information regarding what foods can be paired well with each type of sake, what cups or glasses match each type, and what temperature each type can best be enjoyed at. Since, unfortunately, it is written in Japanese, I feel I must provide an English explanation of this stuff in the future. English-speaking readers, please give me a little bit of time to do this.

I have no intention to favor SSI, but since I hope that sake will be loved by more people, I would like to understand this type classification system and use every opportunity to explain about it to my sake drinking friends.
投稿者 いちべー 時刻: 10:55 AM No comments:

Yesterday, I finally drank Chokaisan Gentei Junmai Ginjo, sake that was given in the July's SakeSwap event.

Please have a look at the picture below. What do you say? It looks cool, doesn't it? 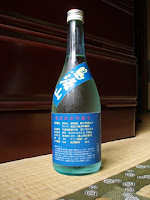 In spite of the alcohol content of 15%, this is genshu (undiluted sake). The first aroma note is refreshing but not too much assertive, which has impressed me favorably. Quite strong acidity stimulates taste buds on your tongue and brings you coolness. This is light drinkable sake, but is also savory sake, which is because of genshu, I guess. The sake has a crispy aftertaste, and I feel only little bitterness (I am not very good at bitterness).

I enjoyed this sake with cucumber with soybean paste this time. I still have half of the bottle, so I want to try this sake with some sashimi next time. 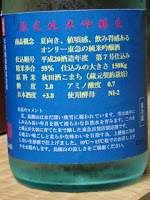 Sake for Drinking and Sake for Tasting

If premium sake such as ginjo sake and junmai ginjo sake is considered to be sake for tasting, reasonably priced honjozo sake, junmai sake, or even futsushu (regular sake) can be taken as sake for drinking.

Last Sunday, at a brewery in Niigata prefecture, the toji master brewer, who is my good friend, and I were drinking sake sitting on sake boxes, that can contain eight 1.8-litter sake bottles. 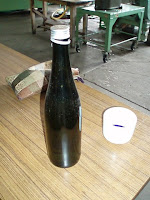 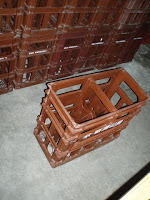 I believe ideal sake described by the toji is truly "sake for drinking," which is usually low priced sake.

I have no intention to judge which sake is better, "sake for tasting" or "sake for drinking." However, I have a fancy that many of the heavy drinkers prefer "sake for drinking." While it goes without saying that low priced sake favors heavy drinkers from the aspect of price performance, it is also true that drinkers can drink sake like one the toji describes to their hearts' content without getting tired of drinking it.

In my opinion, such low priced and easy-to-drink sake, as well as premium sake, should be enjoyed broadly in public, which, I believe, will contribute to sound development of sake culture.

By the way, I brought the toji two cups of low priced cup-sake (Sawanoi Yusuijikomi, the cheapest sake from Ozawa Syuzou brewery in Tokyo), and he drank it with relish. I was very happy to see it.
投稿者 いちべー 時刻: 1:56 PM No comments:

"SakeSwap" is an activity hosted by Andrew Yamaguchi. This is a monthly activity, which any resident of Japan can join. Those who want to participate the activity of a specific month must sign up for the activity by the end of the preceding month. A partner is selected among the participants for each participant, and they exchange their selected bottles between the selected partners. So, if you join the SakeSwap activity you can share the delight of your favorite sake with your partner, and you in turn may encounter new local sake. I think this is an interesting activity, and I have signed up for July's SakeSwap.

Yesterday, I visited a nearby liquor shop, where I always find sake products that are usually difficult to find in other places. At this time, I happened to find two bottles of Sawanoi Ginjo Nakagumi BY2008: one was 1-sho bottle and the other, 4-go bottle. These bottles were only two bottles they had. 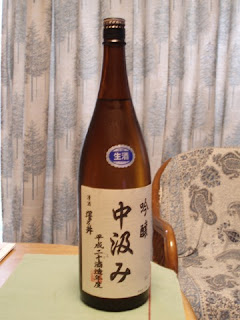 So, yesterday, I purchased these two bottles, the smaller bottle for my sake swap partner and the lager bottle for myself. I hope my partner will like this sake.

Last Friday, I visited two sake-related establishments. If you are staying Tokyo and want to go out for a casual sake experience, these places are my recommendation. 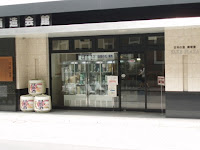 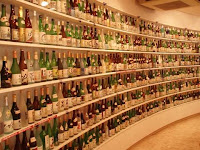 
名酒センター (Sake Center)
While Sake Plaza is a kind of sake showroom, Sake Center is something like a standing-up bar. They provide various types of sake from different places in Japan. Select three favorite bottles of sake, for which you are supposed to pay 500 yen (this is the minimum price and the price may be higher depending on sake you choose).
You can enjoy more types of sake here than at Sake Plaza. 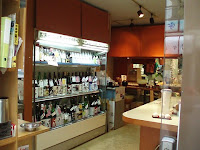 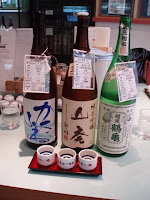 What Is Good Sake?

I believe that the attraction of sake is that there are diverse brands and each of various sake breweries is making sake with distinctive taste. The diversity of sake brands offers us great enjoyment in tasting different sake and comparing them. 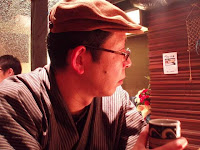 However, sake lovers including me tend to pay too much attention to the sake they are drinking. They often say something difficult like how the sake taste, what the rice variety is, whether kimoto yeast starter is used, the complaint that the sake has an excessive foreign taste that should not be expected for the rice milling rates, the state of aging, and so on. In an extreme case, they would be distracted from foods and enjoyable conversation over drinking sake. In that case, what is sake for?

Pondering the above, I am lately beginning to believe that good sake adds spice to foods being paired with it and makes its drinkers merry, but, at the same time, it does not make the drinkers too much aware of the sake itself.

The trigger of why I became to think in this way is the following words said by one of my friends who is the toji of a sake brewery: "I want to make sake that can be drunk without making its drinker think about it too much. It must be so easy to drink that you can drink on and on, and then you suddenly find an emptied bottle in front of you."

At first, I did not think such sake was good sake, thinking that such sake was not very attractive. Later, I considered what he said over and over and began to think it sounded true. 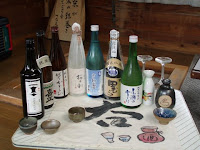 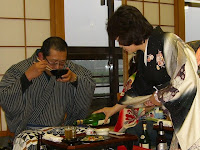 Suppose that there is sake which is not very characteristic in taste or aroma, but the more you drink it, the merrier you become, and the more you get drunk on it, the happier you become. When you wake up in the next morning, you feel refreshed and think, "Oh, I drank so much last night, but I had a good time. How come I was so happy?" You try to recall the taste of the sake, but you can't do so clearly. You just feel that was nice sake. If there is such sake, it may be really good sake, mayn't it?
投稿者 いちべー 時刻: 12:39 AM No comments: