Recently, I drank four types of sake that come from my neighboring three cities of Fussa, Akiruno, and Ome. The sakes are Tamajiman (多満自慢), Kasen (嘉泉), Kisho (喜正), and Sawanoi (澤乃井). They are all namazake (nonpasteurized sake) of honjozo or tokubetsu honjozo.

These sakes are those I often drink without paying any special attention, but this time I compared them with each other, and could find differences between them. Interesting.

I don't intend to say which one is nice or which one is bad. However, in terms of my preference, I would choose Kisho. I myself usually do not think of pairing with foods and just drinking sake without food is also O.K. with me. In such a case, flinty clean dry sake with rather strong acidity like Sawanoi Honjo Nama may not be suitable for drinking it singly. However, such sake is maybe nice when you are eating various foods. 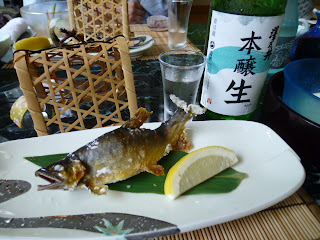 Recently, my friends and I visited to the Kitakata City, Fukushima Prefecture. We stayed at Hotel Fujiya located in the Atsushio-Onsen district, which we could reach after driving the car northward from the center of Kitakata City for about 10 minutes. The hotel was a typical Japanese onsen ryokan, where we ate, drink, and slept in tatami-matted rooms, wearing yukata, and enjoyed onsen hot spring.

We arrived at the hotel quite early at around 11 o'clock. Someone from the hotel was to bring us to Yamatogawa Shuzouten (大和川酒造店) in Kitakata City.

After leaving our car keys with the hotel, Mr. Takahashi, front desk clerk, gave us a ride to Yamatogawa Shuzouten. On the way to Yamatogawa, however, we wanted to have lunch. Kitakata City is famous for its Kitakata ramen, and, in addition, there seemed to be anything to eat that could be recommended.

We didn't need to waver in our decision, and decided to eat Kitakata ramen at Kiichi as recommended by Mr. Takahashi. According to him, Kitakata ramen generally uses soy-sauce based soup. However, he recommended Sio Ramen of this restaurant, which is salt-based. He said they were using special salt, which was contained in the hot spring waters springing somewhere in the mountains beyond the Atsushio-Onsen district.

After being seated at the counter, I ordered Sio ramen according to his recommendation, and Sio ramen came after a while. To my surprise, the ramen included five slices of pork in spite of the fact that it was not a char-siu-men but a mere ramen (char-siu-men is a ramen topped with sliced roast or boiled pork, while an ordinary ramen usually includes one or two slices). "Just a ramen includes five slices. Then, how many does a char-siu-men of this restaurant?" "Fifteen? No way! I don't think people want to eat that many. Maybe, special pork?" These thoughts were my light-minded guesses. Anyway, this ramen was nice. The rather thick curly noodles well caught the salty pork-based soup, and the noodles and soup came together in balance to my mouse. 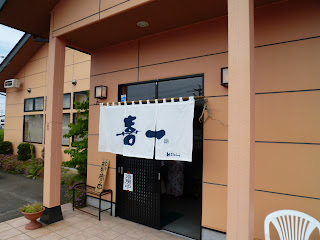 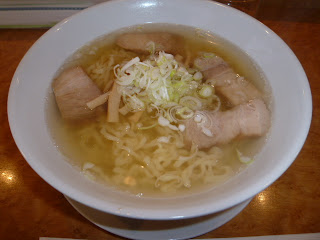 After lunch, Mr. Takahashi took us to Yamatogawa Shuzouten. This brewery is making sake under the brand name of Yauemon (弥右衛門). I had already drunk this sake and I knew it was rich in taste with a flavor of koji.

To be precise, the place we visited was "Yamatogawa Hoppou Shiryokan" (大和川北方風土館). These facilities were once used for sake production but are currently used as facilities for sake brewery study tours for visitors and a concert hall. The facilities also include a sake tasting corner and souvenir shop. According to the guide, their sake production place has been moved to another place, which is called Iide-gura (飯豊蔵). 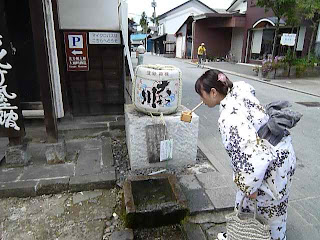 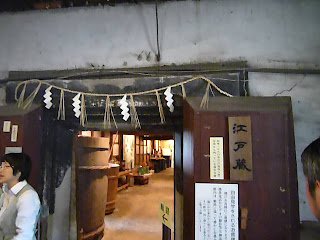 The guide woman ushered us into the facilities, giving us a routine explanations about their brewery and sake making. The building was divided into three major parts: Edo-gura, Taisho-gura, and Showa-gura. In the oldest Edo-gura, the thick, long pine beam supporting the roof seemed to be something they boasted of. Anyway, her courteous and comprehensible explanation during this tourism-focused sake brewery tour was somewhat boring. However, this was a necessary time for us to undergo before reaching the sake tasting corner, where we could try various types of sake from this brewery for free. Thus, finally, long-awaited tasting time started.

Kasumochi Genshu Yauemon from this brewery was brewed by using almost twice the amount of koji rice than average sake, and its rich graceful sweetness deriving from the koji rice left a quite pleasant impression. However, I didn't want to drink sake with such sweetness too much. Instead, I rather prefer Junmai Karakuchi or Honjozo Chohkarakuchi. And, I bought Muroka Junmai Ginjo Nama Omachi as a souvenir.

By the way, Mr. Takahashi wrote a blog article about our visit to Yamatogawa Shuzouten.

After returning to the hotel, we took a hot spring bath, and then gathered in a small room, where our dinner had been prepared. The hotel kindly allowed us to bring sake bottles that we got this day in the room and we could enjoy our favorite sake with the foods. I had heard Aizu was famous for basashi (raw horse meat), and the hotel, knowing we were heavy drinkers, prepared basashi for us. However, I am not very good at raw meat, and I asked our waitress to grill my meat. They kindly accepted my request.

In addition, of course, that bottle of Muroka Junmai Ginjo Nama Omachi that I bought several hours before was completely emptied on the same day.