I attended the 8'th Nishitama Sake and Sake Cup Gathering held in Akiruno City on Saturday, May 22, after attending a kura study tour at a sake brewery in the city. 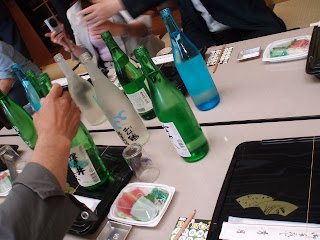 Before noon, for the kura study tour, I visited Nakamura Syuzou, Inc., which is known for its brand name Chiyotsuru. It is rare that we can see the interior of this brewery, and it was the first time for me to go inside of the brewery.

You do not see the sake of this brewery very frequently on shelves at liquor shops in Tokyo, and they seem to operate their business in a relatively quiet way. However, their sake is rich-flavored and clean-cut and I like their sake. The brewery boasts of its multi-time winning of gold awards at National New Sake Contest. The latest gold awards of this brewery are those won in the two consecutive years of 2009 and 2010, suggesting that the brewery has high brewing techniques.

The master brewer showed us the inside of the brewery, including the rice-steaming room, fermentation room, storage room, etc.

In the rice-steaming room, there was equipment for making streamed rice such as a rice washing machine, soaking tanks, horizontal continuous rice streaming device, rice steaming caldron, in which a coil heat exchanger was placed. These devices and machines are quite commonly found in most sake breweries.

The fermentation room was chilly air-conditioned. There were neatly arranged 10,000-litter thermal tanks in the room. A scaffold was set up between the two rows of tanks at the level of the top surfaces of the tanks. Workers are supposed to move from the scaffold onto a tank on which they perform their work such as stirring of fermentation mash. The tanks are equipped with handrails on their tops for worker's safety. The low ceiling seemed to make the work on the tanks hard for some tall workers since they had to bend over on the tanks. It was fortunate that the master brewer and the accompanying worker were not very tall.

The storage room, a kind of big refrigerator, has a narrow entrance, and I could not find anything special after taking a glance inside. So, I asked several questions of the brewery worker accompanying us to spend time, and the kura study of about 30 minutes ended shortly.

This time, we were not allowed to take pictures of the inside of the brewery buildings and I have no photos from the brewery to present here. However, we could freely take pictures in the exhibition hall of sake making tools that was established on the premises. 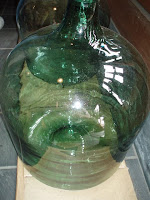 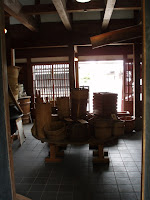 In the exhibition hall, visitors can sample some sakes from the brewery, but on that day, we were going to attend the 8'th Nishitama Sake and Sake Cup Gathering later, and we just tasted their liqueurs, yuzushu (citron liquor) and umeshu (plum liquor). Especially, the umeshu was not very sweet, exhibiting clear taste and an impression of slight citrus aroma. Although some sake lovers tend to keep a distance from sweet liqueurs, but I felt that they might able to enjoy this umeshu.

Then, we moved to an Akiruno Rupia assembly room, where the 8'th Nishitama Sake and Sake Cup Gathering were held from 2:00 p.m.

This time, I tried to carefully taste Chiryotsuru sake, and I felt that the sakes from this brewery were relatively rich in taste compared with the sakes from the other three breweries, and I liked the sake characteristics of this brewery. The provided Chiryotsuru sakes were Krakuchi Nama Chozoshu, Junmai Namazake, and Junmai Ginjo Namazake, which I tried in this order. Of them, Krakuchi Nama Chozoshu was especially nice. In spite of the rice milling rate of 65%, this sake had a fruity aroma, and it had a moderate impression of being "nama."

Also, I renewed the view of Kasen Funeshibori Muroka Genshu. I usually order this seasonally limited sake in December, and drink it soon after the delivery of the bottle. So, it was the first time for me to drink this sake in May. I recognized how this sake can turn from a blunt young sake into a roundly ripen one during its storage of about half a year. It seems that this sake is shipped in April and December by subscription. So, I would like to order this sake also in April next time.
投稿者 いちべー 時刻: 1:57 PM No comments:

Once upon a time, there lived three happy sake drinkers, who were a lady and two guys.

Anyway, also this time, they were drinking happily. Whenever they got together, they had sake and got dead drunk happily.

One of my drinking friends recently visited Tobacco and Salt Museum and bought a sake cup made of salt there. We decided to get together and drink some sake from this cup called "shio-guinomi."

There has been a custom that people place some salt on the edge of a masu (box-shaped wooden sake-drinking vessel) and drink sake from it while licking some salt at times.

In old days, when people were poor and had difficulty to prepare good stuff to be paired with sake, salt was seemingly a handy alternative to something to be paired with sake, but using salt in this way had to be sound somehow miserable. Now that the Japanese people are not so poor as they were after World War II, drinking sake only with salt may sound stylish since it seems that such sake drinkers love sake and really want to enjoy sake.

This salt sake cup is said to have been produced after the producer was inspired from the custom of using a masu on whose edge some salt is placed. Salt tastes only salty, but drinking from this salt cup was an interesting experience. 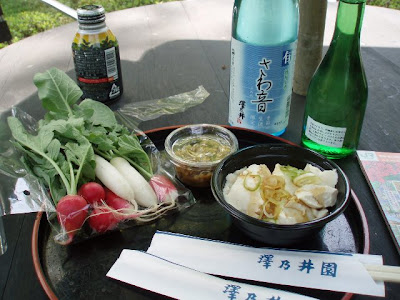 My friend and I went to the Okutama area on May 5.

They were selling Junmai Namazake Sawane, which is low-alcohol sake and is sold during the summer season. I bought one bottle of this sake to drink it at a table in the rest station of Sawanoi-en. The low-alcohol sake tasted flinty and crispy, and I feel happy with such sake when it's hot. Besides the sake, we bought young radishes and fresh tofu that was still warm. The tofu was rich in taste and crunching fresh radish with wheat miso paste was really refreshing.
投稿者 いちべー 時刻: 4:29 PM No comments:

Sake is a Must for a Festival in a Mountain Village

It is no exaggeration to say that, in Japan, sake is drunk where a festival is held. They bring sake brewed in the vicinity as offering at a temple or shrine festival. Yesterday, I visited a shrine in a montane village in Okutama Town, Tokyo to see shishimai (lion dances). And, sake had an important role as a nice supporting player of the festival.

The shrine is located on a mountain slope, and the approach way to it climbs along steep stone steps. There is a torii gate halfway, and beyond and above the torii gate, stands the main gate of the shrine. This is a two-story gate. The steps continue climbing even under this gate. If you walk through the gate and come out, you'll find yourself in a square. The square is almost as high as the second level of the gate building, and if you turn around, you will see a stage on the second floor of the gate building. So, this architecture is unusual as a shrine gate. 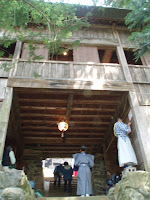 The mountain slope further continues beyond the square, and another flight of stone stairs leads to the main building of the shrine above. 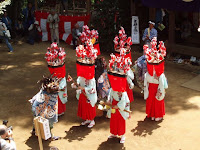 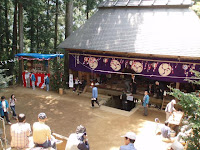 On both side of the stairs in front of the main building, there are stonewalls and the places are formed into several tiers so that these tiers can be used as audience seats that look down the stage of the main gate. General visitors sit in these audience seats to see lion dances dedicated to this shrine while those concerned with the festival and guests sit on the stage floor and eat foods and drink sake. On the stage floor, several bottles of the local sake Sawanoi are seen near one of the low tables.

A funnily masked clown appeared in the program called "Yumi-gakari." He was dancing with a bottle of sake hanging from his waist.

After a while, I found that the clown was not there any longer. I wondered where he was. Soon, I found he had started serving sake to the audience. Assumedly, the sake was the one he was hanging from the waist while he was dancing. To my delight, he was coming toward me. I was given some sake. It was fun to exchange some words with him while drinking the sake. This was really a delightful festival.