September 9, my two drinking friends and I visited a sake brewery named Toshimayashuzo. 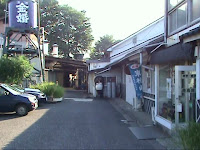 The brewery is making seishu Kinkon and Tenjo Mirin (sweet sake for cooking). In this period of the year, they are preparing for new sake making and getting busier. In this busy time, Mr. Tanaka, Sales Manager, and Mr. Ishii, Chief Sake Brewer, kindly made time to receive us.

They told us many interesting stories such as about the establishment and history of this brewery and the related company that has been operating since 1596, which was very popular among people in Edo (old Tokyo) for its shirozake (sweet white sake).

Then, we were shown their premises and facilities.

First, we saw the place where the water to be used for brewing was being pumped up from the depth of 150 meters under the ground. The water is filtered before being used for brewing. According to Ishii Chief Sake Brewer, the unfiltered water is also suitable for brewing sake but he uses the filtered water just because he knew, after he compared the two waters, that he could make better sake with the filtered one. Maybe, he is adjusting the "strength" of water by filtering so that it suites the brewing method of this brewery.

Next, we were taken to the "kamaba," or rice steaming place, where sake-making steps including senmai (washing polished rice), shinseki (soaking washed rice in water), jokyo (steaming rice), and horei (cooling rice) are performed. There were various machines and facilities for sake-making. Sales Manager Mr. Tanaka gave us an easy-to-understand explanation on how each machine work in sake-making process. 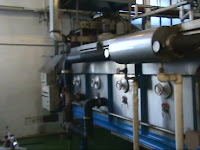 Steamed rice, after being cooled down, is blown by air pressure to reach the koji-muro (koji-making room) or a shikomi-tank (fermentation tank) through hoses .

It was humid and warm, nay, hot in the koji-muro! On a table, steamed rice that had just been carried in was spread out and covered up with white cloth. At this very moment and place, the process in which an amazing microorganism called koji mold changes the steamed rice into kome-koji (malted rice) is taking place. I carefully walked around in the room to see the steamed rice and the facilities there because I felt like I might interfere with the activity of the koji mold if I walked roughly.

After leaving the koji-muro, we entered the shikomigura (sake-brewing house), where several tens of big fermentation tanks are neatly arranged. Mr. Tanaka, a fast speaker, told us about sake-making process enthusiastically and restlessly. He kindly told us everything if asked, giving us good lessons.

Our sake brewery tour continued. After visiting the shikomigura, we saw a storage room, where pressed sake was stored, and other places on the premises. Then, we entered the room used for bottling. In this room, there was a lot of machinery, including the bottle washer, sake-bottle filling machine, capper, and labeling machine. Sake bottles are conveyed along the line including these machines. They are washed, filled with sake, plugged with caps, and labeled as they go through these machines, and become commercial products.

Near these facilities, placed were several tanks each of which measures about 120 centimeters in diameter and about 100 centimeters in height. When Mr. Tanaka partly stripped off the vinyl sheet covering one of the tanks, the fragrance flowed out of the tank. The tank was filled with clear and a little bit yellow-tinged liquid. "Judging from this characteristic fragrance, this is a junmaiginjo sake," said Mt. Tanaka decidedly. He let us smell this sake. I was just happy to know that all of so much liquid was really junmaiginjo sake. What the clarity and brightness of this sake!

Finally, we were led to and entered a big refrigerator where Okunokami, the sake of a special brand of this brewery, was stored, and we found Okunokami of the brewery year 15 (BY15) there. Even the Sales Manager and Chief Brewer had not tasted yet and had no idea about its flavor.

Later in the day, in the reception room, we tasted some sakes of the brewery. Luckily, Mr. Tanaka included that BY15 Okunokami among the sakes to be tasted. The other sakes included nice sakes of the brewery such as Toshimaya Juemon Junmai Nakadori Genshu Nama, Toshimaya Juemon Junmai Nakadori Genshu (pasteurized), Okunokami Junmai Nakadori Muchosei Nama, Junmai Hiyaoroshi. Additionally, Mr. Tanaka brought us a kijoshu, which is a sake of a rare type. This kijoshu had been aged for 23 years in the bottle. I will write about this kijoshu in the section of "Today's Sake" later in this article. 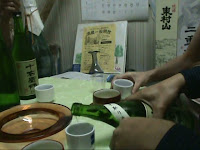 Both Okunokami and Juemon taste massive but, at the same time, it has a fresh and flinty flavor. According to Chief Brewer Ishii, raising the rate of kome-koji makes sake taste rich and deep. Also, he said the sake of this brewery well represents the characteristics of Miyagi Kobo (Miyagi Yeast).

Today's Sake
23-year Aged Kijoshu (Toshimayashuzo)
Kijoshu is a sake of a special type. It is brewed by using sake instead of water in some steps during the brewing process.
I tried a sip of this 23-year old sake. It was a wonderful sake, tasted rich, deep, and mellow, and suggested much of amino acid. Before tasting this sake, I guessed it tasted strong because of its brewing method. However the taste was actually quite meaningful and enjoyable. 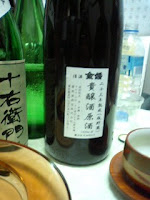 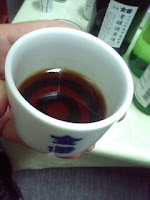 Kikijoko refers to a cup used for tasting sake. It is a white porcelain cup with two indigo blue concentric circles pained inside on the bottom. These blue circles are useful to check the transparency or clarity of sake to be tested and the background white part is used to check the color of sake. 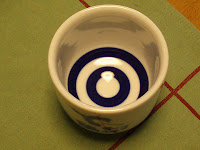 In this year, I got acquainted with a person who is a board member and the sales manager of a sake brewery in Nagaoka City, Niigata Prefecture. Then, I have visited this brewery already twice. In such a case, I was very naturally treated with their several premium sakes at the brewery. He provided me with a kikijoko, which seemed to hold over one go (180 ml) of sake. Probably, this kikijoko is used for professional sake tasting. The thin rim of the cup is convenient to sip a mouthful of sake.

By the way, I drove the car to the fifth station of Mt. Fuji on September 1, 2008. Then, on my way home from the mountain, I dropped in a sake brewery called Nakamura Shuzo, which is not very far from my home. The brewery is making Tokyo local sake with the brand name of "Chiyozuru" and is located close to the interchange of Akiruno on the Ken-odo Express Way. On the premises of the brewery, there is a small exhibition room named "Sakezukuri Shiryokan," where a lot of tools that were used for making sake before are displayed. The displayed articles include a rice steamer, sake pressing tank, small vats, brewing tank, yeast starter tank, koji-making containers. 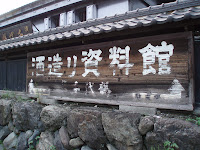 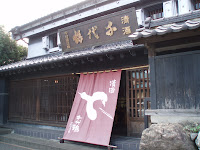 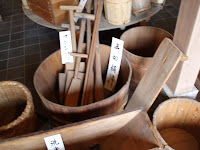 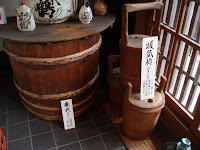 In a corner, there is a shop selling sake-related items such as sake cups and sake made in this brewery. You can taste some of the sakes sold there. Unfortunately, since I was driving this time, I gave up sake-tasting. Instead, I bought a large kikijoko for myself. 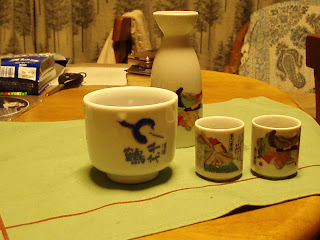 This cup is heavier than the one I used at the brewery in Nagaoka City and the rim is apparently thicker. When I later consulted an on-line encyclopedia, I learned that there are kikijoko's for professional use and those for general use. the professional use kikijoko can be used for a national sake contest held by the National Tax Administration Agency. The kikijoko of this type is light in weight and has a thinner rim. In addition, it has thicker indigo blue circles on the bottom helping sake testers check the clarity of sake. Seemingly, the one I have bought is for general use.

Nonetheless, a large-sized kikijoko seems convenient for tasting sake. When using such a cup, you can taste and smell sake more precisely. You can sip quite a good amount of sake and the wide-open rim of the cup covers your nose to help you smell the aroma of sake.

Today's Sake
Asahiyama Senjuhai (Asahi Shuzo)
Niigara Prefecture is famous for flinty, crispy, and meaningful taste of its sake. Asahiyama Senjuhai is one of such sakes, but this honjozo sake is drier than the average. The briskness of this sake may be good to drink it warmed in cooler weather, but, for now, I drink it cold since it is still hot.
By the way, "NIIGATA O C" mark in the lower right on the back label represents "Niigata Original Control." This is a symbol mark given to a sake that satisfies certain criteria for the quality of water, rice, techniques, etc. used for brewing the sake.
Seimaibuai: 60%
Alcohol: 15 - 16% 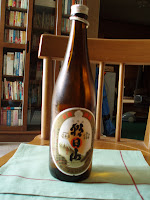 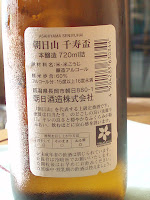