Amazake is a sweet beverage, which is often made by preparing mixture of water, sugar, and sakekasu (sake lees) and then heating it. Another method of making amazake, traditional method, is to use mixture of rice koji, rice, and water, and amazake made in this method has mild sweetness deriving from rice koji.

People tend to think this beverage is something to be drunk in winter, but people in old times drank it in summer because it was considered to be very nutritious and to be a good cure for summer weariness. Actually, the beverage, being rich in vitamins B1, B2, and B6, folic acid, dietary fiber, oligosaccharide, amino acid such as cystein, arginine, and glutamine, and a large amount of glucose, is often referred to as "drinking drip infusion."

By the way, I recently found some interesting beverage being sold in a nearby liquor shop. It is called "Hakata Nerizake." Hakata is the name of a place in , , and Nerizake can be interpreted as sake made by grinding or kneading something. According to the description on the packaging carton, Nerizake is made in the following way: Prepare mixture of rice and glutinous rice, and make lactic acid fermentation occur in the mixture. Add rice, rice koji, and water to the fermented lactic acid mixture, and further ferment it. Then, grind the fermented mixture with a mortar and strain it with silk cloth. The made beverage has 3% of alcohol. It tastes very nice with a sweet and sour flavor. 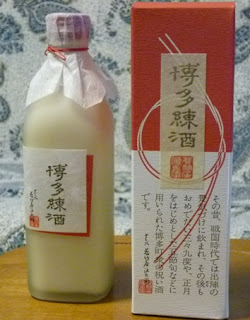 Incidentally, the label on the bottle bears an indication of "清酒" (sake), telling that this beverage is classified as sake according to the 's Liquor and Tax Law. 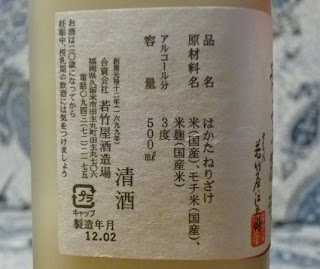 I hardly feel alcohol in this sake because of an alcohol content as low as 3%, and enjoyed it like soft drink. However, this is priced at 1575 yen for 500-ml bottle, which means over 2200 yen if it bottled in a 720-ml bottle. So, this can be said to be quite expensive sake. If this was less expensive, I could probably drink it quite often.

A convenience store in my neighborhood carries the junmai sake named Kabatobi Gokukan Junmai (加賀鳶 極寒純米) made by Fukumitsuya Sake Brewery. Fukumitsuya, based in in , is known for its adherence to making of junmai sake, and I hear the brewery is making only junmai sake (no brewing alcohol-added sake).

A 720-ml bottle of this Kagatobi is sold at a quite reasonably price of 1050 yen, but its flavor is never cheap. At the first sip, I felt that this was sweet sake. Then my taste buds began to recognize its acidity, and the salivary glands were stimulated. Now, my palate was awoken and tasted the sake flavor happily and sufficiently. Then, shortly, the taste of sake faded away quickly. Oh, I knew this is the junmai sake! 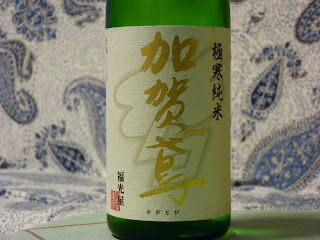 This sake is also nice when warmed.

I sometimes read articles about sake seminars or events held outside , and it seems that they drink sake chilled or at a room temperature in most cases and drinking sake warm is not very popular overseas.

The Japanese have been enjoying warmed sake for a long time, or they even thought that sake was a beverage to be drunk warmed. In recent years, premium sake such as ginjo, junmai ginjo, or daiginjo sake became widely sold in the general market in , and people began to enjoy these high-end sake products. In most cases, they loved to drink these sakes chilled, while many people continued to drink low-priced regular sake warmed.

So, which is the better way to drink sake, warmed or chilled?

Well, let's think of what happens to sake when it is warmed.

Premium sake, especially ginjo sake, is delicately made and such sake is difficult to warm properly, because warming sake tends to detract from its good flavor balance. In addition, ginjo sake, generally, is sufficiently enjoyable without being warmed because it has a clear flavor and a less foreign, objectionable taste. So, people tend not to venture to warm up such sake.

Thus, izakayas or restaurants do not serve warmed premium sake in most cases, and they serve their sake chilled or at a room temperature, instead. In this way, people began to think that only cheap sake is suitable for being warmed and premium sake should not be warmed.

Of course, there is no rule that ginjo sake should not be warmed. There must be beautiful ginjo sake that can be good warmed sake if warmed carefully. Warming up sake may bring about an unexpectedly fascinating flavor (or may ruin delicate balance of flavor).

Actually, I have some successful experiences about warming up sake. For example, I warmed clean and elegant-taste ginjo sake to make it nurukan (lukewarm sake at a temperature of around 40 degrees C or 104 degrees F), getting a result of enhanced acidity, which made better pairing with food. This is a kind of "discovery," and I am often excited at such "discovery," realizing the profundity and charm of the sake world.

By the way, the following expressions are sometimes used regarding warmed sake:

As a flower bud which is very firm in the coldness of winter loosens slowly to open in the spring sun to finally enchant us with its fragrant bloom, when some sake that has been stored at a low temperature is warmed, its virtues including its bouquet and flavor that have been confined in itself become more discernible and enhanced. 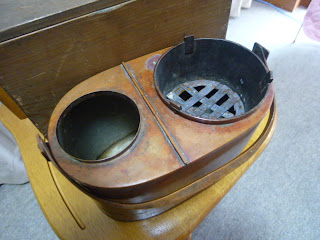 I never intend to give you assertive instructions regarding how you drink sake. However, I would like you not to declare that ginjo sake should not be warmed, and if you are interested in warmed sake, I want you to try warm up various sake and drink it by yourself. I believe you can find nice ginjo sake that increases in its beauty when warmed. I really want you to have exciting fascinating experiences with warmed sake.