Over three years ago, on May 19 of 2009, there was a sake event named "Nagano Sake Messe in " at Grand Prince Hotel Akasaka, where I tasted Ikioi-Masamune (勢正宗) for the first time. 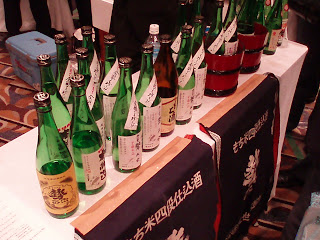 At the booth of Ikioi-Masamune, Mr. Takeya Kodama, a friend of mine, was helping the brewery staff. He let me taste various types of Ikioi-Masamune including namazake (non-pasteurized sake) and hiire sake (pasteurized sake) of the year, namazake and hiire sake after one-year aging, futsushu (regular sake), and 30-year aged sake, and giving me detailed explanation of each sake. At that time, I was impressed with its rich and bold taste.

Later, Mr. Kodama started operation of his sake shop, Jizakeya Kodama, in Minami-otsuka, Toshima-ku. He has frequently been holding sake parties inside , and he usually calls brewers from relevant breweries to attend such parties. I have been thinking of attending such a party, but the venues were usually in Otsuka, Yotsuya, or Kanda, which were a little far from my place, and I felt reluctant to attend such a party.

On August 7, he held a sake party of Ikioi-Masamune at izakaya LP2 in Kichijoji. The party was attended by Mr. Yasuhisa Seki, president of Maruse Syuzouten Brewery and Mr. Shinji Seki from the brewery. I thought it was rare that Mr. Kodama held his event in Kichijoji, and actually this was the first time for him to do so. Kichijoji is not very far from my place (50 minutes by train), so I decided to attend this party.

The attendees of the party could enjoy various types of Ikioi-Masamune while listening to interesting talks by President Seki and his son Shinji.

Friendly and likable President Seki quite kindly answered our questions about his sake making and related issues.

To make its sake, Maruse Syuzouten uses the mochigome yodan shikomi method (four-staged fermentation method using glutinous rice), which is a traditional method, and the atsugake yodan shikomi method (four-staged fermentation method using hot steamed glutinous rice), in which they add big balls of hot steamed rice to the fermenting mash. The resultant sake, which is carefully brewed through elaborate handwork, has a gentle sweet taste of glutinous rice.

According to President Seki, they add big balls of hot steamed rice to the fermenting mash at the final stage of the fermentation process of the atsugake yodan shikomi method. As a result, the temperature of the mash is raised from approximately 8 degrees centigrade to approximately 12 degrees. Then, the enzymes and yeast cells that have already almost stopped their activity are re-activated, enhancing the taste of the sake. However, relying excessively on this method is not recommended because it may generate acetic ether and the sake will often smell like an overripe melon.

President Seki seems to be sticking to sake making using glutinous rice. He said he would like to use glutinous rice also for koji rice.

By the way, I guessed that the sakekasu (sake-lees) obtained by pressing the fermenting mash of this sake contained a lot of half-melted grains of glutinous rice, and I asked President Seki whether it tastes nice. He said, "Yes, and narazuke (pickles preserved in sake-lees) using this sakekasu is especially nice." 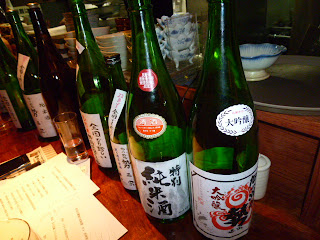 All sakes had elegant sweetness (I felt like the sweetness gently permeated cells of the body) and a bold taste. Especially, Futsushu of No. 3 was very nice. It was so nice that I could hardly believe that this was regular sake.

One-year aged Atsugake Yodan Junmai Nama Genshu of No. 8 was also nice. This bottle had personally been kept for a year by Mr. Kodama in the refrigerator at his shop, and it is sold nowhere. This sake had a rich taste and bitterness, and it was so nice that the inner side of my both cheeks wanted another mouthful after I swallowed down a mouthful. It has a taste somewhat resembling a caramel sauce. A little bitter but sweet.

After drinking different types of Ikioi-Masamune, I thought that this sake tended to become nicer after an aging period of one year or so. Maybe, sake is usually gets better when it is aged for a proper period under proper conditions. I sometimes try to keep my sake in the refrigerator, but however strongly I am determined, I soon bow down to the lure of the sake and soon the bottle becomes empty. This is my problem.

By the way, the izakaya LP2, an underground restaurant, has a bright atmosphere. They say that the interior design is based on the concept of sunlight filtering down through the trees on a comfortable sunny day. On the ceiling and walls embedded are a lot of sliced cedar logs resembling bracket fungi, diffusing the smell of fresh timber. There are several counter seats and a few tables, and especially, the tables are non-linear shaped tables, providing customers with a relaxing mood so that they can feel like they are in a natural environment. 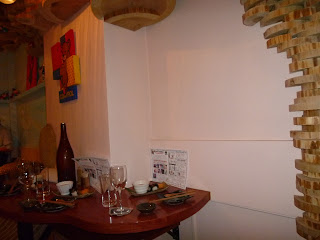 As to their foods, each menu item was made elaborately and was nice. 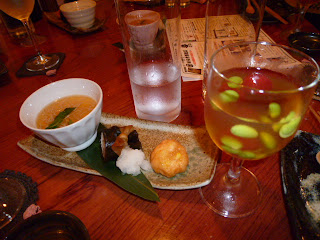 Today's video: My favorite kandouko sake warmer. I love warmed sake, and I use this device to prepare warmed sake.
投稿者 いちべー 時刻: 9:18 PM No comments: