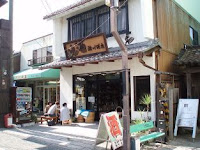 I was staying in Nagahama City in Shiga Prefecture on October 18. I dropped in a liquor shop Hashikawa in the city and purchased a bottle of sake named "Shigasakari Wataribune." "Waratibune" is taken from the name of a rice variety Shiga Wataribune Roku Go, which is used to brew this sake.

The rice variety Shiga Wataribune Roku Go (sixth variety of the Wataribune group) was developed at Shiga Prefectural Agricultural Experiment Station in 1895 and belongs to an ancestral family of a famous sake rice variety Yamadanishiki. Wataribune Roku Go had been cultivated for making sake as a recommended variety of the prefecture between the period of 1916 and 1959, but then the cultivation of the variety was discontinued.

In a recent year, they started test cultivation of Wataribune Roku Go in Shiga Prefecture and test brewing was performed in the 2005 brewery year (*1). Therefore, the sake I purchased is presumably a product of just a few years old.

*1: A sake brewery year starts in the beginning of July and ends in the end of June.

(A lot of kimono-clad women appeared in Nagahama City because the city held a kimono event on this day.) 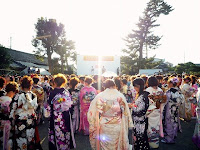 Today's Sake
Junmai-ginjo Shigasakari Wataribune (Omi Shuzo)
I like the strong acidity of this sake. The taste should be described as being bold and having a strong impression rather than being rich.
Rice used: Shiga Wataribune Roku Go
Seimaibuai: 60%
Alcohol: 18.3%
Sake meter value: (+)4
Acidity: 1.9
Yeast used: No. 1601 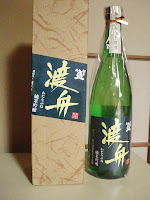