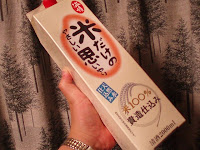 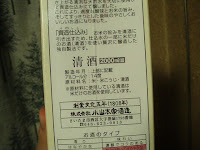 When I was shopping in a supermarket in my vicinity recently, I picked up this carton-packed sake without much thought. The name of the sake read "Komedake no Yasashi Omoiyari" (tender consideration that only rice has). The carton contains 2,000 milli-litters and the sake is sold at the price of 880 yen, half the price of average regular sake (futsushu).

According to the indication on the package, the brewer's name of this sake is Koyama Honke Shuzo (http://www.koyamahonke.co.jp/index.html). This sake brewery is the main branch of Koyama Brewery in Kita Ward, Tokyo. So, this sake is a sort of a relative of Tokyo sake. In addition, the package tells that the sake is made by the method of "kizo shikomi." According to the explanation appearing on the package, they use sake to replace some amount of mother water. This reminds me the brewing method of kijoshu. However, this sake is far cheaper!

So, I became very much interested in this sake.

Well, I bought it. However, haven't drunk it yet.

What does this taste or smell like? I don't expect too much because of the price, but the question is the price performance.
投稿者 いちべー 時刻: 9:18 AM