I know that drinking a specific type of sake with a right drinking vessel enhances good characteristics of the sake. So, I tried choosing vessels according to several types of sake, and drank the sake. However, I may have been dogmatic in deciding on these combinations of sake and vessels described below, and some people may have different ways of combining sake and these vessels. 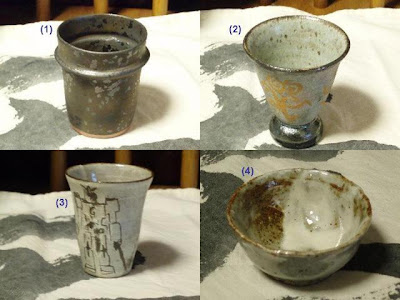 The first vessel is a tall one, which can hold as much as about 140 ml of sake. When I filled about 60% of this cup with ginjo sake, the aroma rose up from the inside of the cup. I set the thin brim of the cup to the lip and tilted the cup. The sake flew into the mouth from the cup smoothly, and I felt a pleasant touch of sweetness first. It seems that this cup accentuates the clear taste and fragrant aroma of ginjo sake.

This tall cup has a white outer surface, on which line drawings have been scratched. The brownish color of the foundation mud is exposed as a result of the scratched lines. So, I am sure that two types of mud are used to make this cup (brownish mud is used for the foundation with white mud coated on it). The outside surface of the cup does not seem to have been glazed, while the inside surface has been glazed and has a layer of thin glass. I drank fresh chilled namazake with this cup.

By the way, the line drawing shows giant robots, or Mobile Suites (Gundam). So, this is a very unique sake vessel and I liked it at first glance.
投稿者 いちべー 時刻: 11:19 AM