Bunkin-takashimada is one of the most magnificent Japanese coiffures, which is known as a hairstyle of the bride at a wedding.

I heard that Mrs. Akiko Sekiba, who is working as hairdresser of Japanese coiffures, would hold an event in which she would demonstrate the hairdressing of the traditional Japanese coiffure of bunkin-takashimada at Koedo Kurari in Kawagoe City. So, the other day, I visited the city to see the demonstration. 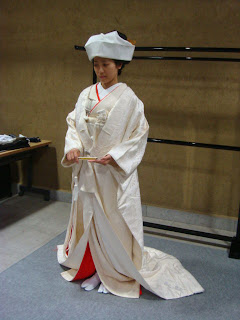 In the demonstration, Mrs. Sekiba parted the hair of a model into several locks and combs each of the locks beautifully. Then, these parted locks become the back tress, side tresses, and front tress, drawing graceful lines towards the top of head and joining the root tress. These tresses together make up a thick chignon on the top of head. Hana-kogai, kanzashi, and kushi are inserted in the hair as finishing ornaments, and then the hair is wrapped with pure white cloth called tsuno-kakushi. Thus, an art work using human hair is completed.

Here is video I took on the day. See how the hairdresser works on the hair (play list including 8 video works)

By the way, Koedo Kurari, where the demonstration of this hairdressing was given, is in the place where Kagamiyama Shuzo sake brewery (corporate body different from the current Koedo Kagamiyama Shuzo) was operating before. There are still the buildings that were formerly owned by this defunct company in this place. The commercial establishment of Koedo Kurari was opened last year by using these buildings. The demonstration was given in a rental gallery of this establishment.

Kurari has a building named Makanai-dokoro, which was built in the early Taisho Period (1912 - 1926). In this Makanai-dokoro building, the restaurant Hasshuutei is operating. This restaurant, based on its policy of local production for local consumption, provides its food service for customers, and it serves of course the Kawagoe's wonted Kagamiyama sake. The local sake can usually be paired well with local foods, so one will easily make a good match in pairing local sake with local foods. Therefore, I drank Kagamiyama Junmai Shiboritate and local Sayama-cha soba (soba using powder of green tea, which is also a local product in the vicinity).

Fascinating, thank you so much for sharing!

Diane,
Thank you for the comment. The hairdresser said she would hold an event like this in May, so I would like to report it if I will have a chance.