I would like to write about a sake restaurant Mamiana in , . Unlike many izakayas in Japan, this restaurant is quite sophisticated and it is easy for a woman to enter this restaurant even when she is alone (many people in Japan still tend to think that an izakaya is a place for men or drunkards, and woman's entering such a restaurant alone gives an impression that she is quite a heavy drinker or another negative impression). 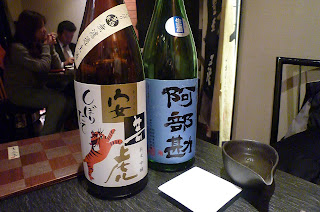 Now that beer and other types of overseas alcohol beverages have gain in popularity in , consumers, especially young people, do not lately drink sake very much. One of the reasons why sake is not popular among young people is that they have the prejudice that sake is not "sophisticated" or sake smells "bad." We have been watching scenes on TV and in movies in which senior and middle-aged men drink sake in tatami-floored rooms in old houses, at messy izakayas, at food stands on streets, and in other cheap settings. In brief, these sake-drinking people do not look very cool, and probably, these scenes have helped people conceive negative images about sake.


Well, how such prejudice like that I described above can be wiped out from young people to usher them to the wonderful world of sake? I feel Mamiana is showing an answer to this question.

In Mamiana, light lilting music is playing. The interior of the restaurant gives a clean, free and easy impression, creating a somewhat urban atmosphere. Working women on their way home may feel free to drop in at this restaurant and enjoy some sake with nice foods.

I think, from the video works provided below, which I made before, you can see the atmosphere in this isakaya.

The woman in this video seems to have a habit of straightening her index finger when she holds a sake cup. It is good that this is not her middle finger.

If she comes into this izakaya alone, she will probably drink sake like the way in this video.


Sake-loving men shall take their girlfriends, wives, partners, etc. to this izakaya to introduce them to a stylish way of drinking sake. This, I think, will contribute to expanding the sake market in .
投稿者 いちべー 時刻: 3:45 PM

Email ThisBlogThis!Share to TwitterShare to FacebookShare to Pinterest
ラベル: izakayas and restaurants