It is well known that sake is a useful liquid not just as a beverage but also for cooking and beauty.

A skin lotion containing sake as an ingredient is said to be effective for whitening. But, I am too lazy to make a skin lotion from sake, so I apply it directly to my face. Everyday after washing my face in the morning and after taking a hot bath in the evening in the last winter season, I applied a small amount of sake to my face, and I could keep my face skin moisturized during the winter. Someone might say that sake is too valuable to apply to your face, but much less sake is needed to apply to your face than to drink by yourself.

Thinking of possibilities of sake as described above, I recently found the Internet site "Cooking Magic!" This site has been established by the Japan Sake Brewers Association in an aim to promote "use of sake," and seems to be a part of the across-the-country campaign "Sake for Every Household," which has started in the late April.

The original bottle designed for the campaign has a triangular shape in cross-section with the capacity of 180 ml. This shape of the bottle is convenient for storing it in your refrigerator in a door pocket between other cylindrical bottles, thus the bottle shape saving the space in the refrigerator.

The site also carries recipes using sake. But, what is especially interesting is the concept of "hitofuri sake" (one-shake sake). According to the site, one shake of sake over various foods increases the savor and flavor of them. Ryorishu, or cooking sake, is something to be added to a sophisticated food as its ingredient while it is being cooked. In contrast, hitofuri sake is used in a way more like seasonings such as soy sauce, salt or pepper, so this is more handy! One shake of sake into the rice cooker before turning on the switch, one shake over cold rice or other foods before nuking them, one shake into an instant cup noodle after adding hot water. These are quite easy ways of using sake. Even I, who do not cook very often, can use sake to improve the taste of food.

So, I have already tried hitofuri sake. Cooked rice packed in a plastic container, which is eaten after heated with a microwave oven. Before nuking it, I poured some sake in the container of the rice. With a glossy appearance, the finished rice tasted nice. However, it smelled somehow like sake. Maybe, I had added too much sake. O.K., I can adjust the amount of sake next time. 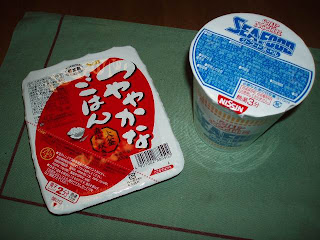 Then, I had another try: instant cup noodle. Immediately after pouring hot water, I poured some sake in the cup. When eating this, I felt much alcohol in the soup. I felt like I was being choked with vaporized alcohol, and slightly tipsy. I am afraid that I added too much sake, again. As a sake lover, I tend to add sake more than necessary. However, the taste certainly improved, with enhanced umami compared with seafood noodle I usually eat. If you are not good at alcohol, you can boil sake to completely vaporize alcohol beforehand (be careful since vaporized alcohol may suddenly catch fire), and you can use it for cooking. 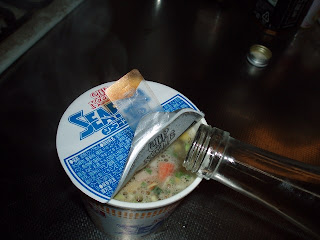 I would like to try to apply hitofuri sake to various foods in the future.
投稿者 いちべー 時刻: 11:07 AM

the soul of japan said...

Very educational. Thanks for sharing.

Tony san,
Thank you for the comment.
I want people to know that even those who are weak at alcohol can use sake. I think the more people know about sake, the more sake is consumed.